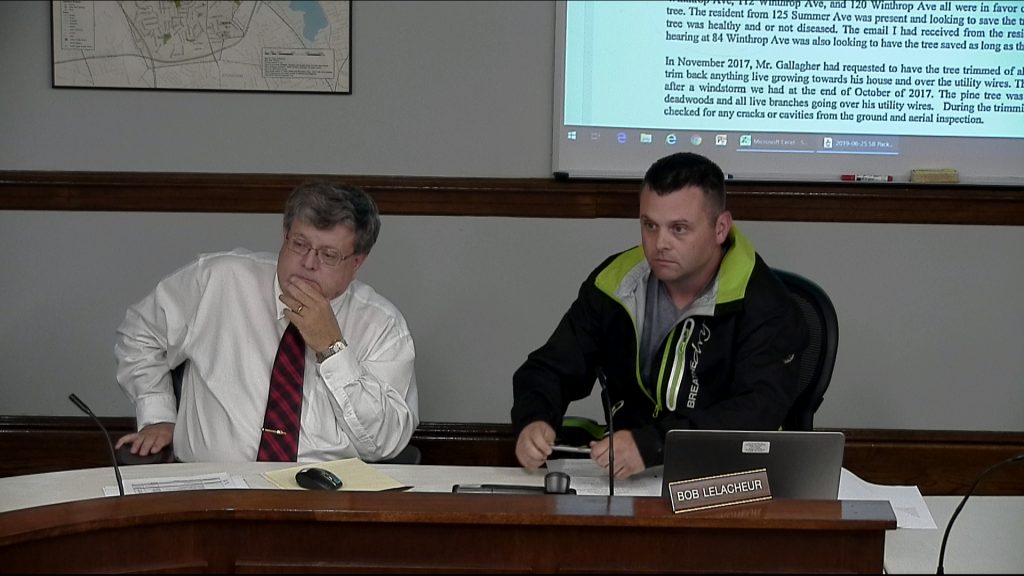 The Select Board voted 4-0 on Tuesday, June 25 to allow a large town-owned pine tree to be removed at 199 Winthrop Avenue. John Gallagher, the homeowner, appealed Tree Warden Mike Hannaford’s decision not to remove the tree after several five-inch diameter limbs fell off the tree onto his property during a wind storm earlier this year. The tree, which is well over 100 feet tall and thirty-three inches in diameter, is considered healthy by Hannaford and thus was not eligible for removal unless the Select Board intervened. “We don’t remove healthy trees,” Hannaford stated, though he later admitted, “I would not want this tree in front of my house.” He continued to share that the tree would not likely come down in a storm, but it was possible that the top of the tree could snap off in a heavy wind.

Gallagher stated that he considers the tree a safety and property risk and that the roots are “destroying” the sidewalk and a retaining wall. Several neighbors present at the meeting also asked that the board allow the tree to be removed. Several members of the board did suggest that new replacement trees be planted on Winthrop Street once this tree is removed. 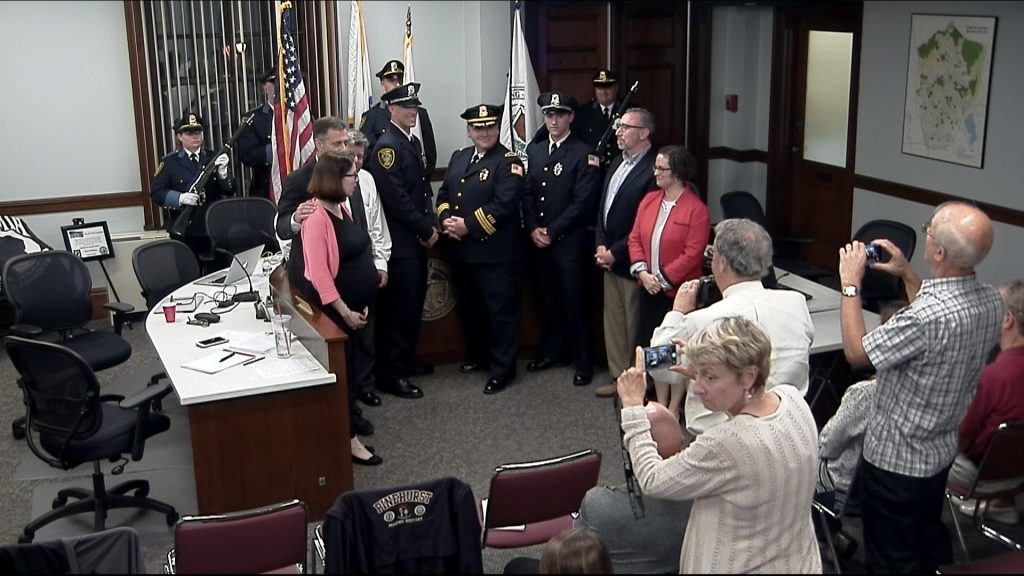 Two new Reading police officers, Joshua Griffiths, and Christopher Briere received their badges in a brief ceremony with the Select Board. Both officers have completed the academy and are already patrolling in town. Select Board chair Vanessa Alvarado greeted the two new officers, “Our community is very happy to have you,” she shared. 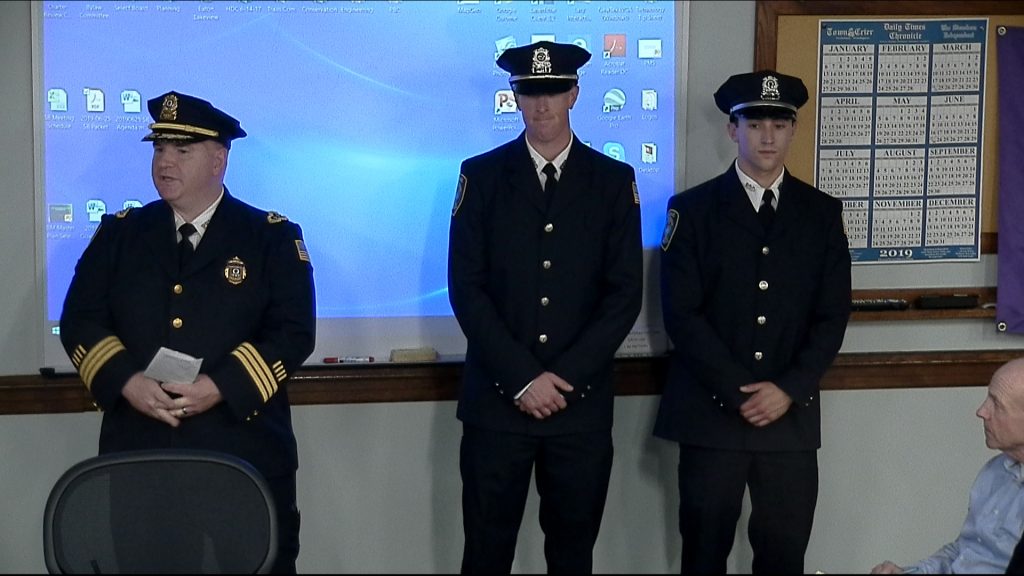 Genevieve Fiorente, Recreation Administrator, shared the results of the most recent Birch Meadow Survey, which was conducted during December of last year. Over 1,100 people responded to the survey, sharing ideas and thoughts about how to best use the area. The two greatest needs according to the results are for bathroom facilities at the complex and for more and better walking and running trails. The largest number of people reported that they use Birch Meadow for youth sports and for passive recreation activities. Birch Meadow Sub-Committee member Mary-Ellen Killian also stressed the need for the area to be “safely and properly illuminated” for patrons of the complex. Select Board member Andrew Freidmann asked about the area once known as Imagination Station, which has been used for parking for the last number of years. Fiorente answered that paving and lining the area has been considered, but the nearby wetlands curtail what can be done. A suggested idea for the location of new trails was presented tot he board, though Fiorente stated that a landscape architect would be needed to finalize plans.

The Select Board chose to defer a conversation regarding a request from the owner of the Reading Depot building to repaint the building, changing the color, as the applicant was unable to be present. Jonathan Barnes, chair of the Historical Commission shared that the building is currently painted in the livery of the rail company that built the structure in the 1840s and the commission voted at its last meeting to ask that the original colors be retained. The matter will be taken up at the Select Board’s next meeting.

The Select Board voted 4-0 to take no action on its right of first refusal to purchase 0.6 acres of land on the north end of Main Street. The parcel is too small for the town to use and it has little conservation value. This vote allows a current purchase and sale agreement between the current owner and a private purchaser that is already in place to move forward.

The board held a preliminary discussion on revising the costs for the joint depot parking/compost sticker. It reviewed the Town Manager’s progress on his Fiscal Year 2019 goals and looked ahead at his Fiscal Year 2020 goals. The board also had a brief discussion about initiatives it could take to make Reading more eco-friendly.