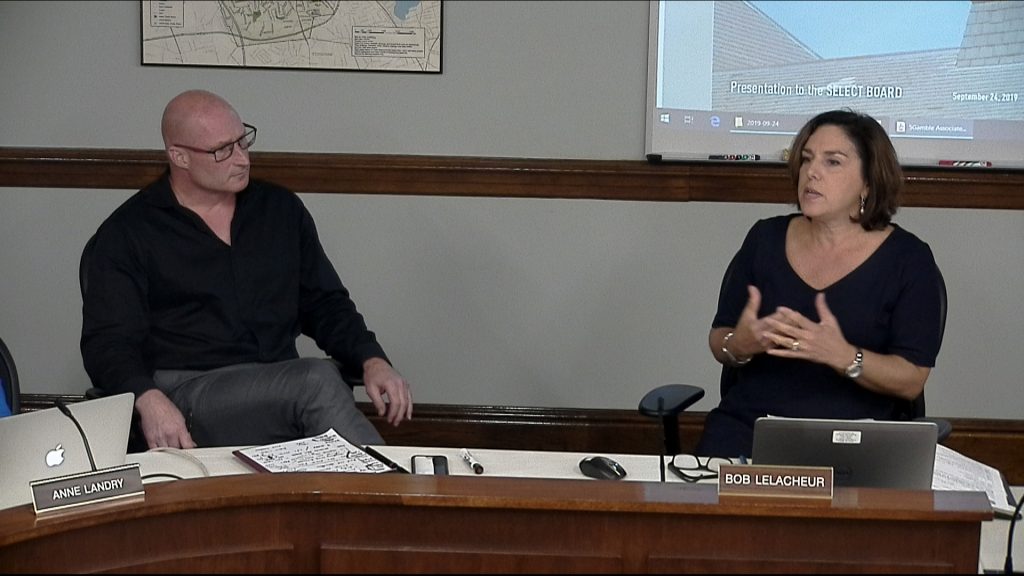 Assistant Town Manager Jean Delios, along with David Gamble, an urban designer from Gamble Associates, presented ideas for the future of the industrial land along Ash Street to the Select Board on Tuesday, September 24. This work, funded by a $50,000 state housing choice grant program, has endeavored to create a vision for what is being referred to as the “eastern gateway” into Reading, an area that is defined as an economic opportunity area bounded by Jordan’s Furniture, Bolton Street, Ash Street, the nine-acre industrial area off Ash Street, and the Wakefield line. 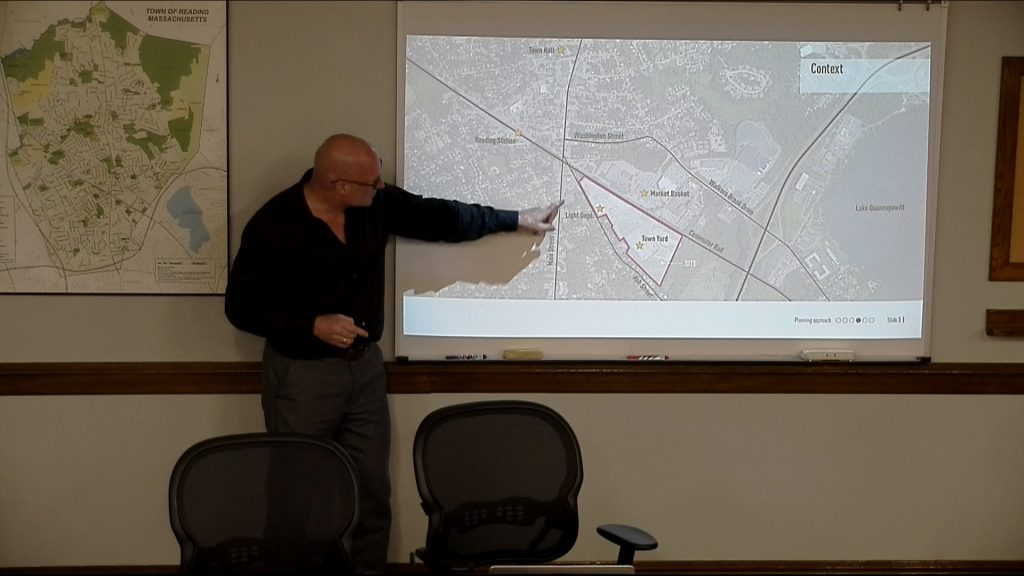 Delios and her team met with Gamble Associates over several months to begin to review possible redevelopment concepts focused on the Ash Street area. Delios referred to the concepts as “managed growth.” Former plans for the area involved demolition of all the current buildings, relocating the Reading Municipal Light Department (RMLD) and other businesses, and developing the area as one parcel. Gamble’s process seeks to keep downtown vital, preserve what is important, but be open to new opportunities. His conceptual designs suggest gradual development of the area, thinking of it as one campus called “The Yard” with current buildings and new development being connected with well-planned roadways, bike and walking paths, and park-like common spaces. Gamble believes that the area should focus on the historic RMLD building on the site, possibly as an arts or community center, working with current businesses and owners to create more green space and updated building exteriors. He stressed the option of repurposing current buildings once their current use is no longer needed.

Delios, Gamble, and the town’s planning staff have had positive response from current land and business owners as well as from RMLD. RMLD General Manager Coleen O’Brien spoke at the meeting, indicating a willingness to work with the town, while pointing out some of the challenges that may be faced, given the size of RMLD’s use of land in the space. She also pointed out that contractors were showing up this week to begin to rework the parking area on Ash Street. Gamble had suggested this area as a park-like community space. He reminded the board that his concepts were part of a ten to twenty-year plan and short-term maintenance in the area should not be delayed waiting for this type of development to occur. 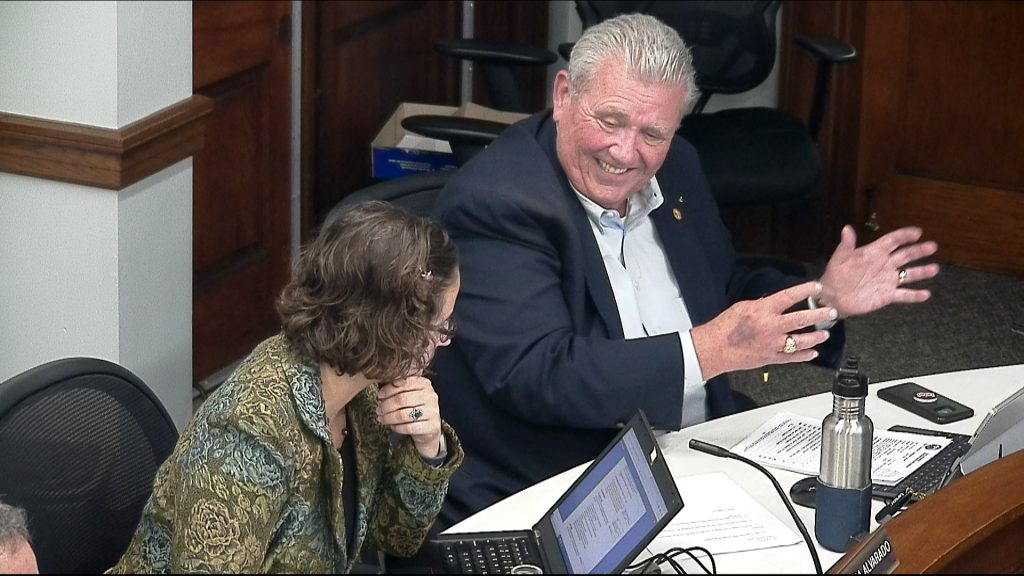 Select Board member John Halsey praised the idea and expressed that he was pleased with the idea of working with current businesses as the area changes. “Patience is the key,” Halsey confirmed. Board chair Vanessa Alvarado also spoke approvingly of the concept stating that it is, “more practical and desirable” than previous ideas to simply hand the area over to one larger development. Delios and Gamble plan to return to the board once a traffic study of the Walker’s Brook Drive area is completed.

The Select Board also received an update from David Zeek of the Climate Advisory Committee. It has been one year since the plastic bag ban has gone into effect in town, and only two complaints have surfaced in that time. Both were deemed not to be violations of the new policy. Zeek updated the board on other activities of the committee, speaking specifically regarding suggestions that would make charging stations for electric vehicles more available and noticeable around town.

Resident Phil Pacino made a request of the board to consider how non-owner occupied Airbnb’s in Reading might be regulated, given the amount of development activity that is happening in the downtown. His concern is that many of the new apartments and condos could be utilized in this way, creating a “hotel-like” area, rather than a true community. The board will look at the issue in a future meeting. 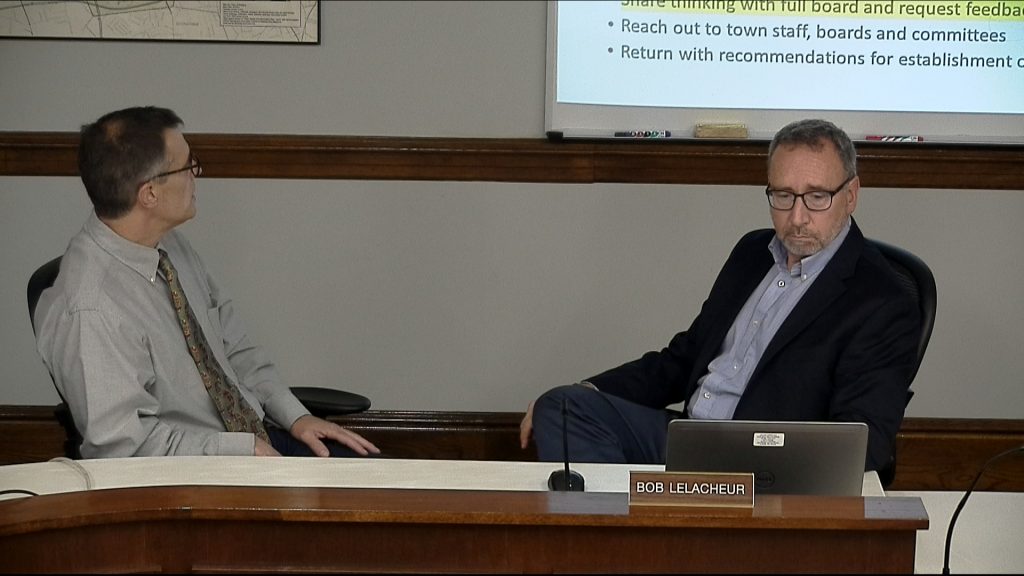 Board members Andrew Friedmann and Mark Dockser reported on their sub-committee work regarding the creation of a new economic development committee in town. The committee would focus on ways to encourage new growth in Reading. Dockser and Friedmann anticipate that the group would report to the Select Board and function in a similar fashion as the Permanent Building Committee. Dockser expressed several times that it is not their intention that this committee would replicate what is already being done by other groups or by staff, but rather lend new energy to the issue of attracting and retaining businesses in town. The sub-committee will receive comments from the members of the board and develop and rough draft proposal.

Halsey presented an updated Select Board Liquor License policy which would seek to create more consistent oversight over licensees, requiring employee training sooner than is currently required, as well as more frequent reporting to the town regarding that training from licensees. The desire to update the policy stemmed from recent events regarding a recent liquor sales violation that showed defects in the current policy.

Discussion surfaced around how much time a new employee of an establishment can work before receiving mandated alcohol service training. Halsey argued for seven days, stating that all the training is online and can be taken easily and at any time. Alvarado countered that 14 days seemed more reasonable given that restaurants often have probationary periods of that length for new servers. The current policy allows 30 days. Dockser pointed out that no employee should be allowed to serve alcohol in town without the training. He suggested that the real issue becomes how many days does it take an establishment to make a report to the town about the newly trained employee.

The board is also considering application fees for liquor licensing that reflect expenses incurred by the town, as well as the creation of a separate category for veteran’s clubs, possibly with reduced licensing fees. A public hearing on the changes is planned for the October 15 Select Board meeting.

After some discussion, the Select Board agreed to adopt the form for the Town Manager’s evaluation that was in use prior to 2015 for this year’s evaluation. The form that has been used for the past few years, which was changed to simplify the process, has come under a fair amount of criticism from the members of the board as being inadequate to the task.