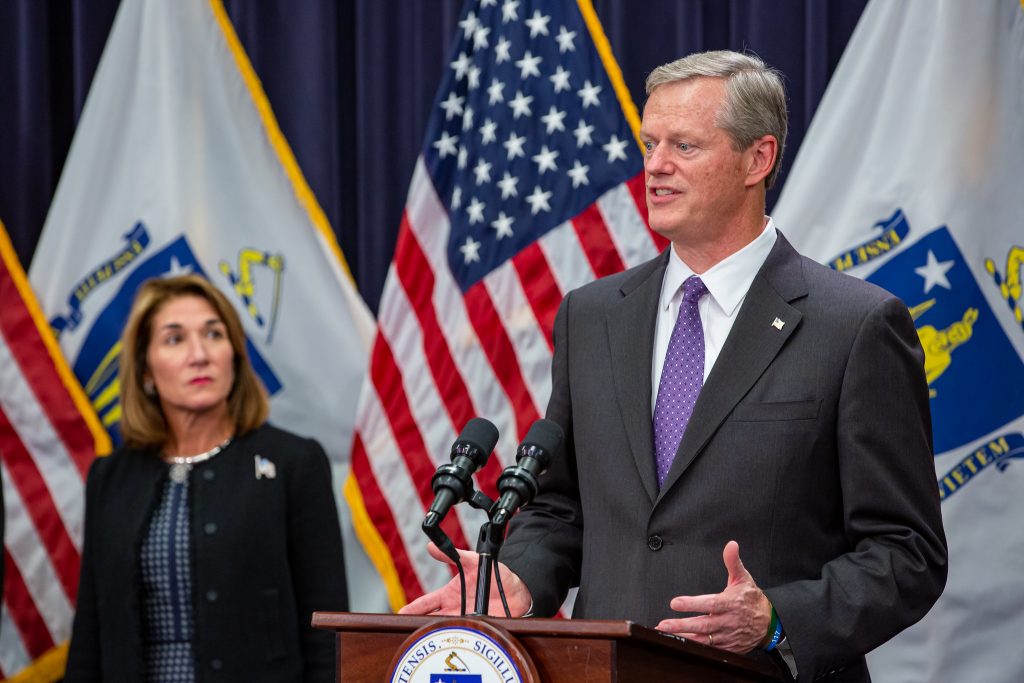 BOSTON – Governor Charlie Baker today declared a public health emergency in response to confirmed and suspected cases of severe lung disease associated with the use of e-cigarettes and marijuana vaping products in the Commonwealth. The Governor called for a temporary four-month statewide ban on the sale of flavored and non-flavored vaping products in both retail stores and online. The sales ban applies to all vaping products and devices, including tobacco and marijuana. The ban takes effect immediately and lasts through January 25, 2020.

The Centers for Disease Control and Prevention (CDC) and the Food and Drug Administration (FDA) are currently investigating a multi-state outbreak of lung disease that has been associated with the use of e-cigarettes or vaping products (devices, liquids, refill pods, and/or cartridges). To date, the CDC has confirmed 530 cases of lung injury across 38 states. While many of the patients reported recent use of Tetrahydrocannabinol (THC)-containing products, some reported using both THC and nicotine products. No single product has been linked to all cases of lung disease.

Earlier this month, the Department of Public Health (DPH) mandated that Massachusetts physicians immediately report any unexplained vaping-associated pulmonary disease to the department. As of today, 61 cases have been reported to DPH. Three confirmed cases and two probable cases of vaping-associated pulmonary disease in the state have already been reported to the CDC. The rest are pending further clinical analysis.

“The use of e-cigarettes and marijuana vaping products is exploding and we are seeing reports of serious lung illnesses, particularly in our young people,” said Governor Charlie Baker. “The purpose of this public health emergency is to temporarily pause all sales of vaping products so that we can work with our medical experts to identify what is making people sick and how to better regulate these products to protect the health of our residents.” 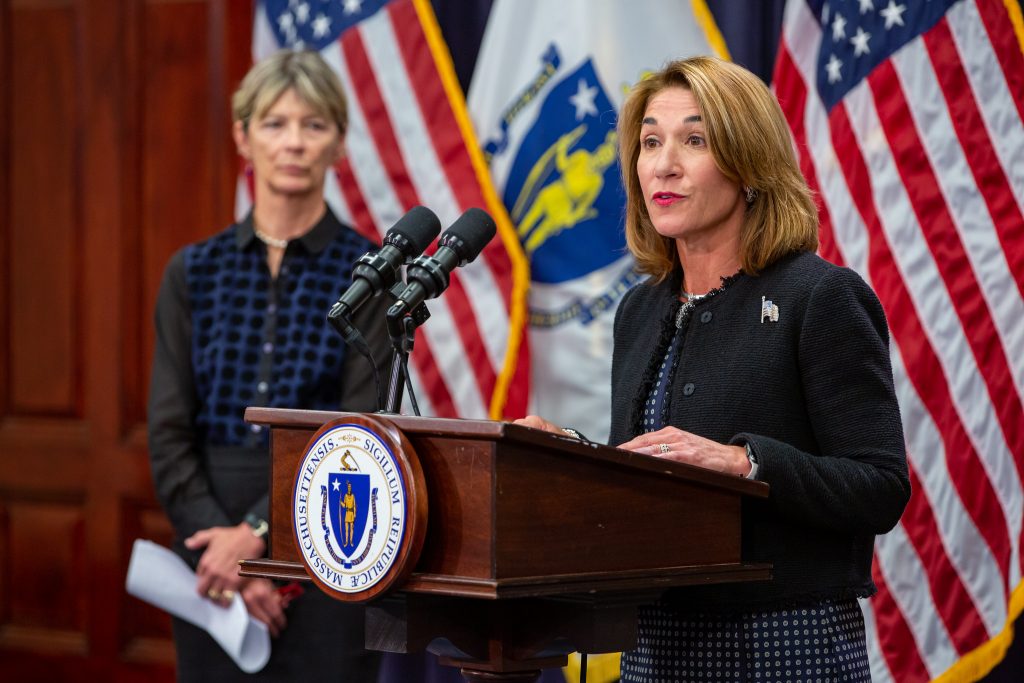 “Vaping products are marketed and sold in nearly 8,000 flavors that make them easier to use and more appealing to youth,” said Lt. Governor Karyn Polito. “Today’s actions include a ban on flavored products, inclusive of mint and menthol, which we know are widely used by young people. It is important that we continue to educate youth and parents about the dangers of vaping.”

Vaping consists of inhaling and exhaling the aerosol (often called vapor) produced by an e-cigarette or similar battery-powered device. E-cigarettes come in many different sizes, types and colors. Some resemble pens, small electronic devices such as USB sticks and other everyday items. The products are often compact and allow for discreet carrying and use – at home, in school hallways and bathrooms and even in classrooms.

Last week, the Administration convened a group of pulmonary doctors and pediatric experts from Massachusetts to share what they have seen in their patients—especially our youth—and their concerns about the trajectory of vaping related lung disease. The experts shared information about the rapid rate of addiction to e-cigarettes, use, and overuse of marijuana vaping products and cases of youth becoming hospitalized within two weeks of using vaping related products.

During the temporary ban, the Administration will work with medical experts, state and federal officials to better understand vaping illnesses and work on additional steps to address this public health crisis. This could include legislation and regulations. The Administration will also work on providing more resources for a public awareness campaign and smoking cessation programs. 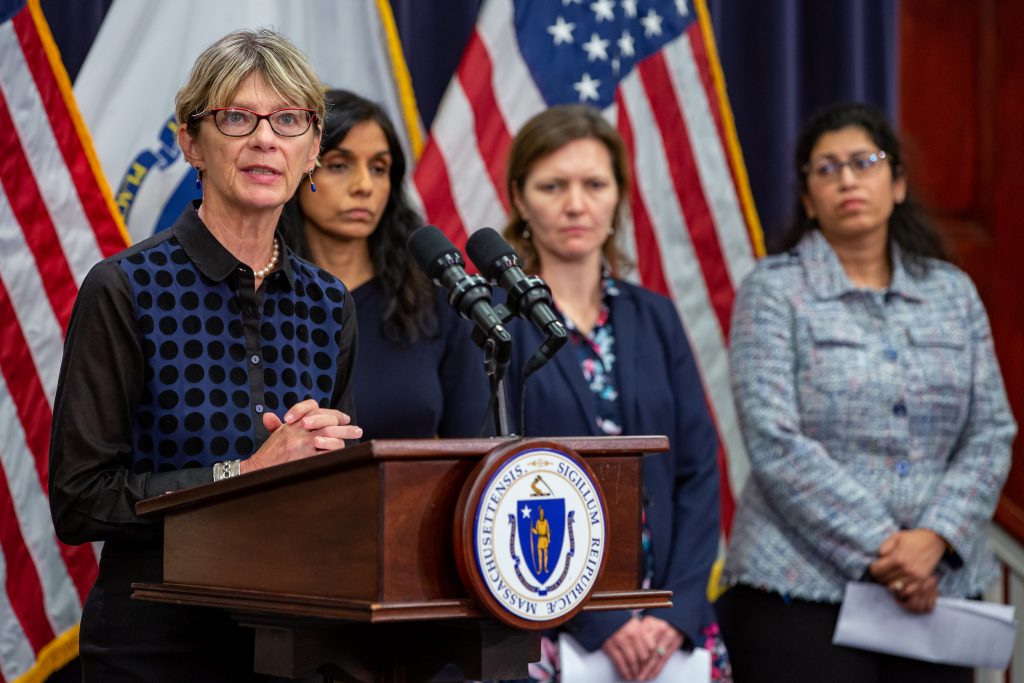 “Vaping is a public health crisis and it is imperative that we understand its impact at both the individual and overall health care system level,” said Health and Human Services Secretary Marylou Sudders. “As a result of the public health emergency, the Commonwealth is implementing a statewide standing order for nicotine replacement products, like gum and patches, which will allow people to access these products as a covered benefit through their insurance without requiring an individual prescription, similar to what our Administration did to increase access to naloxone.”

Massachusetts has a long history of having a strong tobacco cessation and prevention infrastructure that requires close collaboration between DPH and local health departments which assist with the enforcement of tobacco control policies at the local level.

The Administration will work with these groups to ensure the temporary ban is enforced while also increasing the availability of cessation resources and the capacity of the Massachusetts Smokers’ Helpline. The Helpline is a free and confidential service for individuals who seek help to end their tobacco use. The service includes specialized coaching, including behavioral health counseling and connection to local support groups. Over 9,000 individuals are served annually.

The Baker-Polito Administration has strengthened the Helpline’s robust outreach about nicotine replacement therapies so individuals who were previously vaping are not inadvertently steered to traditional cigarettes. Individuals who would like help-seeking treatment are encouraged to call the Helpline at 1-800-QUIT-NOW or visitmakesmokinghistory.org.

“Our priority is protecting the public health,” said Public Health Commissioner Bharel, MD, MPH. “The Governor’s actions today will help prevent more cases of this dangerous lung disease while getting people, especially young people, the help they need to quit.”

To further inform the public about the dangers of vaping and e-cigarette use, DPH is relaunching two public awareness campaigns aimed at educating parents and middle and high school-aged youth. “Different Products, Same Danger,” originally launched in April 2019, links the dangers of vaping to cigarette smoking and was developed with the input and feedback from middle and high school students across the state. “The New Look of Nicotine Addiction,” originally launched in July 2018, seeks to spread the word that these high-tech products are harmful and contain nicotine which can damage a teenager’s developing brain and lead to addiction. More information on both campaigns is available at mass.gov/vaping and getoutraged.org. Materials are also available for download on the Massachusetts Health Promotion Clearinghouse website.

Over the next four months, the Administration will work closely with the Legislature, public health officials and other stakeholders to consider legislative and/or appropriate regulatory reforms.

Click here to read a copy of the declaration.