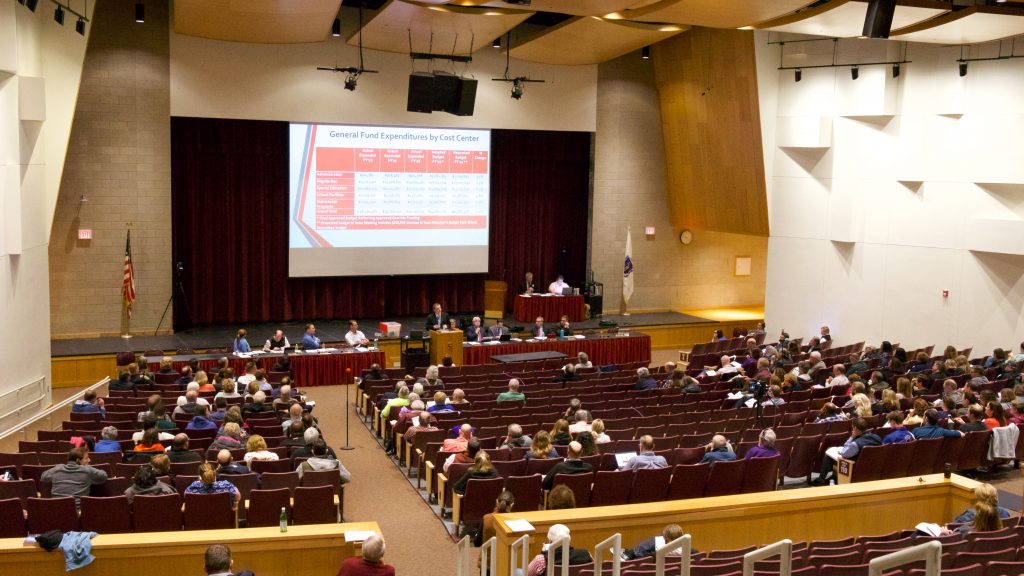 Town Meeting voted on April 29 to authorize the Select Board to acquire, through purchase or gift, three separate parcels of land that have become available in town. Five hundred thousand dollars of the funding is to come from the Sale of Real Estate Fund and Two hundred thousand dollars from the Ice Arena account. The first purchase, under Article 21, is for 13 acres of land in Timberneck Swamp. The land, which is already surrounded by town-owned conservation land, is designated as wetlands and will likely be set aside as conservation land as well. The authorized purchase price is $25,000.

The second, under Article 22, is for 14 acres of land adjacent to the Burbank Ice Arena. Ten of those acres are considered wetlands, but four are considered developable if an easement is granted across land already owned by the town. The land was assessed for $76,000 without the easement and $1.3 million with the easement. After negotiation, the owner of the property, the Zanni family, agreed to a price of $750,000. Select Board chair Vanessa Alvarado shared that Reading is 100% developed and that the opportunity to acquire land is rare. She expressed concern that if the town does not act on the land purchase a developer could use it however they saw fit. “The best chance to control [the land] is to own it,” Alvarado argued. Several members expressed concern about the purchase price. Town Meeting member Peter Brown questioned the desirability of the land for development, given the amount of site work needed on the property. After discussion Town, Meeting member Tony D’Arezzo asked what would happen if Town Meeting reduced the purchase price authorized. Town Counsel Rey Miyares informed D’Arezzo that the deal would be broken and would have to be negotiated. Town Manager Robert LeLacheur shared that the Zanni family was likely to seek out another buyer if that were to occur. D’Arezzo offered an amendment to reduce the authorized amount to $400,000. The amendment was defeated and the article passed as presented.

The third parcel, under Article 23, is ten acres also owned by the Zanni family just north of the Burbank Ice Arena that is mostly wetlands. The land could be used for nature trails of other passive recreational purposes. The sale is conditional on the town purchasing the parcel under Article 22. The sale price is $25,000.

Town meeting spent considerable time learning about, then debating Article 16, which authorizes $4 million in debt service for building security. LeLacheur shared that certain specific aspects of the plans could not be shared as to not publicize potential vulnerabilities. He shared the timeline of how the plans reached this point and then Superintendent of Schools John Doherty shared the executive summary of the report from the security contractor. Doherty shared that the funding will be used to address the ability to deter, detect, and delay potential issues. Doherty also shared that access control to buildings is the largest potential vulnerability. The first steps, those dealing with operational controls and policies have been accomplished. “We have done all we can do for free,” LeLacheur stated. The funding will pay for an update to the dispatch center and enhance technical controls in twenty-two areas, many of which are extensions of the operational controls. Many members expressed concern over the lack of community input into the plans up to this point. After much discussion, the article was placed on the table around 11:00 pm. It is expected to be taken off the table for further discussion when Town Meeting reconvenes on Thursday, May 2.