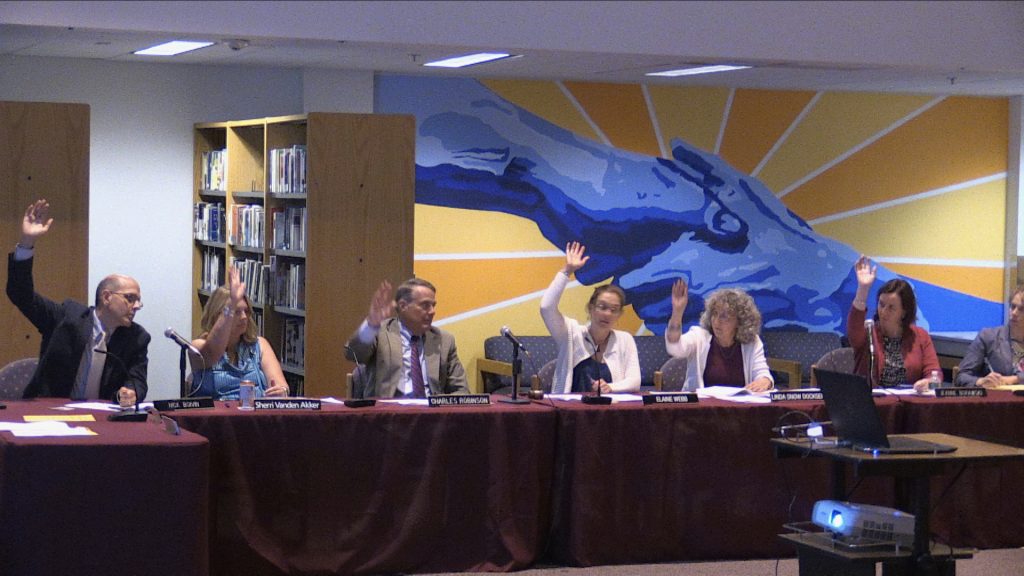 The School Committee, on August 30, voted 6-0 to elect Elaine Webb as its new chair during the committee’s annual reorganization. Superintendent John Doherty thanked outgoing chair Chuck Robinson for his leadership during a challenging year in which a Proposition 2½ override was passed. Webb commented that she is “looking for a considerably less challenging year than last year.” The committee also elected Linda Snow Dockser as vice-chair for the coming year.

The committee was updated by Director of Facilities Joe Huggins as to work that had been completed on district buildings during the summer. This work included summer cleaning, alarm testing, a buildout, funded by the Reading Education Foundation, at Birch Meadow Elementary School, wireless upgrades at all the schools, and the installation of appliances in a new Life Kitchen at Reading Memorial High School. Huggins also updated the committee regarding replacement of the skylights at the Wood End Elementary School. He reported that the project was in progress but had been delayed by the manufacturer of the new panels but that delivery of those panels was expected next week. The work will be completed after hours and on weekends over the next few weeks when the building vacant.

Doherty led a discussion about future capital needs for the school district, especially at the elementary and pre-school levels. He noted that there has been an increase in special education programs, and eighty-nine percent participation rate in full-day kindergarten both of which require space. There are also updates needed at Killam Elementary School, Doherty continued, that will need to be addressed in the coming years.

As a result of meetings with the Town’s Permanent Building Committee, Doherty recommended that the School Committee ask Town Meeting to repurpose $20,000 that had been earmarked for door and window replacement at two of the schools to pay for an enrollment study. Huggins had previously reported that the money would not be needed as the doors and windows in question had been repaired and passed inspection, thus not needing replacement. Member Nicholas Boivin questioned why a study was needed when enrollment had remained mostly steady for fifteen years. Doherty responded, stating that most districts do enrollment studies every seven to ten years and that Reading had not done one since the early 2000’s. Doherty suggested that the impact on school enrollment of the new apartment developments being built in the town over the next few years is unknown, yet needs to be considered in future planning. He also shared that an enrollment study is an important part of an Elementary Master Plan and that the Master Plan could not be done without it. “Now is the time [to do the study] if we are going to make a Master Plan,” Doherty stated. Member Jeanne Borawski asked whether or not the Locker Report of 2012 included an enrollment study. Doherty responded that the report was a snapshot of what was happening in 2011 in the district, where this new study would be a projection for the future. Even if the study were to find no significant growth in enrollment for the next several years, Doherty reminded the committee,”It is programming that drives our elementary space needs.” The committee voted 5-1 to approve the motion.

The committee also voted 6-0 to request that Town Meeting move the $207,500 allocated to the Permanent Building Committee from the override for an Elementary Master Plan to a new line item that could be used by the School Committee for the same purpose. According to Huggins, this study would look at existing buildings in regards to age, condition, access, and traffic flow. Doherty continued that the study would analyze these factors along with projected enrollment and current and future program needs, then make recommendations about how best to proceed. Robinson questioned if this needed to be done now, or could it wait for spring Town Meeting, after the enrollment study was completed. Doherty answered that it was common to do both at the same time as the enrollment study was just a part of the Master Plan Report. Huggins expected the study to takeout six months to complete.

Town Manager Robert LeLacheur informed the committee that the town was in process on several possible projects including a Senior/Community Center and an updated Department of Public Works facility. He also added that the Permanent Building Committee had declined the funding. LeLacheur urged the School Committee to move forward “to have a seat at the table” noting that the Permanent Building Committee expected this type of work to be done prior to any projects ideas or proposals.

Select Board Member Barry Berman also addressed the committee reminding them that in the pre-override surveys, the voters indicated that they wanted “the whole picture” given to them when making decisions regarding any allocation of new tax dollars.

The meeting began with the committee being introduced to fifteen of the thirty-one new teachers in the district, each introduced by the building principal. New Assistant Superintendent Christine Kelley also introduced the two new K-5 curriculum coordinators and Director of Student Services Carolyn Wilson introduced Allison Wright, the new Assistant Director. Doherty reported on all the work that had been completed over the summer including curriculum updates in science and literacy. He also discussed work being done to update the curriculum to the state’s recently adopted updated social studies frameworks.

Doherty reported that 752 new computers have been deployed throughout the district including 504 that are replacing older systems and 248 that have been added to the total number of systems available. These new computers will be divided between student availability and staff usage. A new school resource officer has been hired and will be stationed at Parker Middle School. Most of the new teachers for the high school provided for in the override have been hired, with the exception of a couple of part-time positions.

The School Committee adjourned to executive session at 9:30 pm.