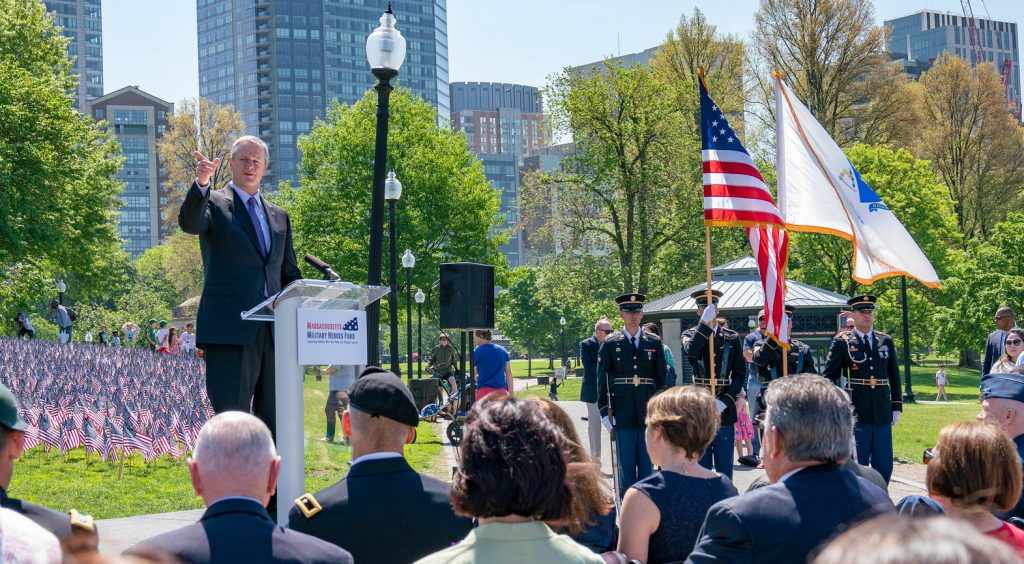 GOVENOR BAKER: “There’s a life people lead before someone in their family is lost in the line of duty while serving this country and then there’s the life they lead afterward. The life they lead afterward—if they are resilient and they are supported and they come to grips in terms of what it is that happened to their family member—can hopefully be a positive one, and a constructive one, and a one of purpose.

“I’m going to talk today about a guy named Andrew Farrar. He was a basketball player from Weymouth who died on his 31st birthday, January 28, 2005, in Iraq. In high school, he was pursued by a young woman, who was a couple years younger than him, named Melissa who eventually wrestled him to the ground and the two of them got married. They eventually had two children, Liam and Tyler, while Andy continued to serve. As he approached what would have been the end of his last tour, he was looking forward to coming home and settling in with wife and his two sons. Unfortunately for Andy and for Andy’s family, it was all going to turn out to be different.

“After Andy died, Melissa died shortly after that. I’m pretty sure she died because the guy she chased and the guy she caught and the guy she had two kids with and who she thought she was going to live the rest of her life with, wasn’t going to be there.

“People talk all the time about the life people lead before somebody dies and the life they lead after. But the folks who are here today who lost someone, and the families that are represented by these thousands of flags behind me, for them it was a daily personal struggle to not only put the pieces back together but to find some way to create positivity and purpose, despite the empty chair at the table. Those families have had to find the grit and the determination and the character to build a new life that in many cases came with twists and turns and obligations and heartache.

“So today is very much about the flags and those they represent, but let’s never forget that they are also about the loved ones who had to put behind the fact that they lost somebody they cared so deeply about, pick up the pieces, and build a life to move forward, and for that, we should never forget.”

In honor of Memorial Day, Governor Baker has ordered that the United States flag and the Commonwealth flag be lowered to half-staff at all state buildings from sunrise until noon and full staff from noon until sunset on Monday, May 28, 2018. The order applies to the main or administration building of each public institution of the Commonwealth, other state-owned or state-controlled buildings and all state military installations.