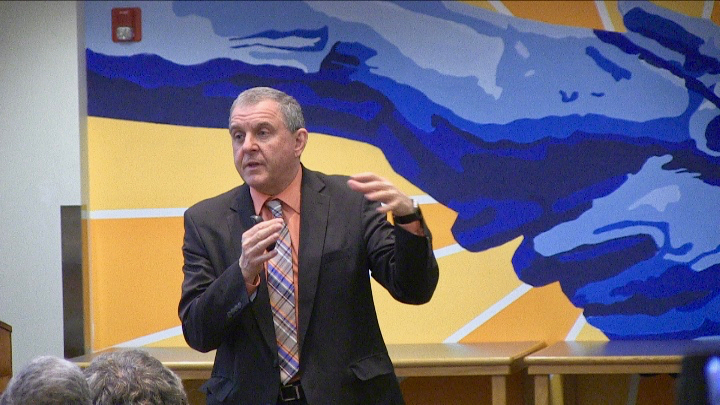 Superintendent of Schools John Doherty hosted a Security Summit in the Reading Memorial High School library at 6:00 pm on May 23. The purpose of the summit was to give residents as much information as possible regarding safety procedures and protocols in the Reading Public Schools. Doherty started the presentation emphasizing the strong relationship the school department has with both the Police and Fire Departments, “It is not like that in every town,” Doherty confirmed.

Doherty shared that the school district has had security plans in place many years before they were required by the state. These plans include regular fire, multi-hazard evacuation, ALICE, lockdown, and shelter-in-place drills throughout the year in all the schools. All entrances to the schools are locked and each school has visitor entrance procedures in place while classes are in session. Doherty emphasized that all entrances in the elementary schools are locked from 7:00 am to 6:00 pm each day. Every building has security alarms and cameras in place. Police Chief Mark Segalla mentioned that the live feeds from the cameras can be seen at police headquarters, but are not regularly monitored due to manpower considerations.

The town has conducted a security review that has produced several recommendations which are being acted upon. Phase I, updating the dispatch center, is already funded and approved by Town Meeting in the Fiscal Year 2019 budget. Doherty and Town Manager Robert LeLachuer, for security reasons, were less specific on what Phase II will include except to say that $4 million is in the capital plan and already funded by Town Meeting. A bond bill is being considered by the Massachusetts Senate now, which, if approved, would fund another $3 million of Phase II.

Doherty then highlighted the work of the school resource officer, the ongoing emphasis on social and emotional learning in the district, and the importance of data collection such as that being done by the biennial Youth Risk Behavior Survey and the PRIDE survey. He also mentioned that ninety percent of the staff has been trained in Youth Mental Health First Aid and thirty teachers have completed the Lesley Coursework on Trauma Practices. A safety committee consisting of the superintendent, town manager, and both chiefs are in place and regularly reviews protocols. Several questions were asked about how the schools monitor social media activity. Doherty replied that there is no way to monitor everything, but that in today’s climate, students are generally good about reporting concerns that they have to trusted adults in the school.

The superintendent gave a review of the ALICE emergency protocol now followed by the school district. ALICE is an acronym for Alert, Lockdown, Inform, Counter, Evacuate. In a potential emergency, all five may not be done, and they may not be done in order. Classroom teachers are able to make a judgment call as to the best course of action if an incident were to occur. This protocol is recommended by numerous security groups around the country including the Department of Homeland Security, is research-based, and is consistently under review. The key is two-way communication to allow for informed choices by school staff. Doherty gave an example where an incident may be in one part of a building and it may be safer for students and staff in another part of the building to evacuate rather than lockdown.

Police Lieutenant Christine Amendola concluded the presentation with a review of the training that the Police and Fire Departments engage in to prepare for an emergency. In an active shooter situation, “The goal is to end the shooting as soon as possible,” Lt. Amendola stated. The officers are also trained not to wait for teams before entering a building. “The goal is to reduce casualties,” Amendola concluded. She also indicated that training has occurred in other locations in town including Camp Curtis Guild, Market Basket, and a local office building. There are plans for an active shooter drill later this spring at the Barrows Elementary School.

The Security Summit concluded at 7:20 pm and may be viewed on RCTV’s YouTube channel.