Reading, MA — After an hour-long presentation, Town Meeting voted to approve $2.2 million for a feasibility study and schematic drawings for the Killam Elementary School project on Thursday. The school was built in 1969 and, though well maintained, has had no significant renovation since that time. During the presentation Director of Facilities Joe Huggins, Police Chief David Clark, and Fire Chief Greg Burns described some of the deficiencies in the current building, which include lead in the water, lack of Americans with Disabilities Act compliance, electrical system deficiencies, water infiltration into the basement, security concerns, as well as the lack of modern fire suppression equipment.

Principal Sarah Leveque also shared regarding programming concerns at the school “There is a lack of space for the complexity of student needs, including special needs areas, spaces for multilingual learners, and small group support.” Leveque explained. She elaborated that there are a few classroom spaces that can only be accessed through other classrooms, a library that is located in open space that is sometimes used as a corridor, and closets being repurposed for instructional and meeting space. She also noted the lack of data connections throughout the building.

School Committee chair Shawn Brandt explained the process for Massachusetts School Building Authority (MSBA) reimbursement. Brandt said that the Killam project is one of eleven approved projects to move into the first phase of the MSBA program out of fifty-eight applications. Brandt continued to share that moving to the next phase of the process requires funding to be committed to the project by the town. “The MSBA is looking for a validation from the town that this is a project that is likely to be supported.” Brandt offered. If the MSBA reimburses the project, the reimbursement rate is typically between thirty-one and forty percent of the eligible project costs.

School Committee vice-chair Carla Nazzaro explained that the $2.2 million if approved, would secure an owner’s project manager for the project; it would pay for a detailed analysis of the needs of the district and the site and would result in schematic drawings for the project. “This needs to be thorough and comprehensive,” Nazzaro added. According to Nazzaro, the $2.2 million is included by the MSBA in the eligible reimbursable costs.

In terms of ultimate cost to the town, Town Accountant Sharon Angstrom provided a “very conservative” preliminary cost estimate of $120 million for the project. When combined with a “lowball” reimbursement rate of thirty percent, this would lead to a cost to the town of $80 million in excluded debt. Angstrom continued, reminding Town Meeting that the excluded debt for the high school and for the Wood End Elementary School will come off the tax rolls in Fiscal Year 2024 and that the debt for the Library will come off the tax rolls in FY 2025. Combining all this information, Angstrom estimates that the total project cost for the average Reading homeowner would be $315 a year more than they are currently paying.

After the presentation, Moderator Alan Foulds called for discussion. Seeing none, he called for the vote, and the motion carried.

Town Meeting also approved the motion under Article eight, which authorized the Select Board to negotiate leases for up to four cell carriers to use space on the new water tower once completed. The previous water tower had equipment from three call carriers on it. Four carriers, Dish Wireless, AT&T, Verizon, and T-Mobile, have already responded with an interest in leasing space on the tower. “This should greatly increase cell coverage [for Verizon] in town, especially in the Birch Meadow complex.” Town Manager Fidel Maltez stated.

Town Assessor Victor Santaniello presented Articles nine and ten. Article nine asked Town Meeting to request that the legislature reauthorize the senior property tax discount program, which was started six years ago, for another three years. Santaniello noted that several seniors in town have shared that “[The property tax discount] is all the difference that helps them age in place and remain . . . in the Reading community.” The cost to the average taxpayer is $35 a year for the program. Town Meeting voted to approve the motion. Under Article ten, Santanillo also asked Town Meeting to accept a Massachusetts General Law which authorizes the Board of Assessors to grant tax abatements for members of the National Guard and the Reserves while serving on active duty overseas. Town Meeting voted in favor of this article as well.

Article 11 – Board of Health

Board of Health chair Dr. Richard Lopez presented Article eleven, which asked Town Meeting to petition the legislature to amend the Reading home rule charter to allow the Board of Health to expand from three to five members. Lopez described three positive outcomes that would result from this change. The first is better collaboration between the Board and town processes. Currently, if any two board members are present, according to Open Meeting Law, a formal meeting must be called forty-eight hours in advance, and minutes must be kept. The second, Lopez also explained, is that the change would promote better communication between board members. He cited the same Open Meeting Law issues, which also govern emails and other communications. Finally, Lopez believes an expanded board will enhance expertise on the board and encourage volunteerism. Town Meeting approved the motion.

Article twelve asked Town Meeting that a prohibition on dog walking in the cemeteries be added to the town’s leash bylaw. Board of Cemetery Trustees member Bill Brown explained that although there currently are rules in place prohibiting dog walking in the cemeteries, they are unenforceable. The addition of cemeteries to the leash bylaw, Brown explained, would add enforceable fines to the current regulations. Town Meeting member Mary Ellen O’Neill called the proposal “verging on the ridiculous” while stating it is an overreaction to a small problem. Brown offered anecdotal evidence of people who ignore the regulations now and are creating a nuisance. O’Neill responded, advocating for an education-first approach to the issue. Maltez shared that it is the practice of enforcement to offer warnings first before issuing fines. After continued debate, the motion was approved by Town Meeting.

Article thirteen asked Town Meeting to approve a request for a home rule petition to the legislature to allow Assistant Chief Anthony DelSignore to continue in his role for one year after the mandatory retirement age of sixty-five. Town Meeting approved the motion.

Maltez then joked that Town Meeting had dealt with articles seven through thirteen too quickly and that town staff who are presenting on Articles fourteen, fifteen, and sixteen were planning on being there on Monday night. As a result, Town Meeting laid these articles on the table. Article twenty had the same issue as Climate Advisory Committee chair David Zeek expected to present on Monday and was not in attendance to present on the article. Article twenty was also laid on the table.

Town Meeting voted 122-2 in favor of amending the Smart Growth Stabilization fund to include payments from both the smart growth incentive payments and the density bonus payments to be deposited into the fund. It also transferred the most recent payment of $414,000 from free cash into the fund. Maltez explained that these funds could only be spent on capital expenditures and require a 2/3 vote of Town Meeting.

Articles seventeen and twenty-two were indefinitely postponed. Article seventeen asked Town Meeting to authorize additional funding for replacement of the Parker Middle School roof. The bidding process revealed that the previously appropriated funding would cover this work’s cost. Article twenty-two allows for a slight increase in electric rates as part of the town’s acceptance into the Green Communities program; however, the legislation that allows for this has not yet taken effect.

After much discussion, Article twenty-three was also indefinitely postponed by Town Meeting. This citizen petition article asked Town Meeting to require owners of buildings downtown to shovel the sidewalks in front of their buildings by 9:00am after a snowstorm. Several Town Meeting members pointed out that there was a lack of specificity in the motion in several places. These questions included who shovels the snow, where snow is to be placed, what a full sidewalk means, and how far downtown extends. Town Counsel Ivria Fried also pointed out that the proposal as presented would not be enforceable as it is not a bylaw or an ordinance. It was suggested that the issue be presented to the Bylaw Committee for review and resubmitted at a future Town Meeting.

Town Meeting adjourned at 10:10pm and will reconvene on Monday, November 21. 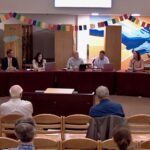 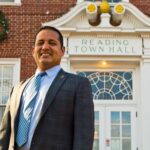 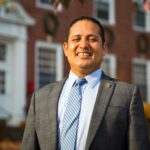