Reading, MA — On Tuesday, by a 5-0 vote, the Select Board approved the placement of a menorah for display on the Town Common during the holiday season. Select Board chair Mark Dockser introduced the idea by reading a list of nearby towns that already display a menorah in a public space, including Wakefield, Lynnfield, and North Reading. “It is a mainstream sort of activity that goes on,” Dockser indicated. He continued to share that, if approved, an event would take place in partnership with other organizations, such as the Rotary, the Chamber of Commerce, or the Clergy Association, on December 14 with the lighting of the first light. A new light would be lit for eight consecutive days; then, the display would come down. “It would be a welcoming thing for the community to have,” Dockser suggested.

Fried continued to delineate the subtle differences between government speech and private speech for the board. Select Board member Christopher Haley, while expressing support for the placement of a menorah, questioned whether or not the board was opening itself for many more such requests through its members in the future. Select Board member Carlo Bacci also wondered whether or not a different non-religious symbol of the season, a Christmas tree, should also be erected on the common given the context of the Supreme Court decision. Select Board member Jackie McCarthy stated, “Context matters and ownership and control matters – we need to analyze future requests.” The board added a discussion of such matters to their list of future agenda topics.

Joe Zucchero, President of Reading Little League, presented a proposal to build a third baseball field at Joshua Eaton Elementary School. Zucchero shared that there are currently two fields on the site. However, the “lower” field has pooling water and needs drainage improvements. He also shared that the infield of that field is sinking. Reading Little League is offering the town $35,000 to build the new field as a “replacement” for the current field, which would be located next to the school building adjacent to the current “upper” field. The current lower field would remain as an “emergency” field.


Abutter Tim Twomey raised concerns about a third field, citing parking in the area during games. Twomey stated that cars are often parked on both sides of California and Indiana Roads, creating difficulty for the passage of emergency vehicles. “It’s a safety issue,” Twomey declared. Zucchero responded that only two games at a time would be scheduled for the site, thus not creating a more significant issue than already exists. He also suggested that moving the field away from the houses and closer to the school may alleviate some of the current parking issues. Twomey agreed with this assessment. The Select Board voted 5-0 to accept the gift from Reading Little League as presented.

The Board also took up the issue of pickleball court availability in town. Community Services Director Genevieve Fiorente noted that pickleball is “the fastest-growing sport in America.” According to Fiorente, Reading Recreation had 2,141 enrollments in its pickleball program this year, and the sport is growing. Her staff has suggested several possible ideas for increased outdoor capacity for the sport, including single-use pickleball courts or dual-use pickleball and tennis courts at Sturges Park and Barrows Elementary School and use of the half basketball court at Washington Park. She also reminded the board that building eight new pickleball courts at Birch Meadow is part of the Birch Meadow master plan. Fiorente noted that pickleball players and tennis players would prefer dedicated courts for the sport. Dockser suggested that the Recreation Committee develop short-term, medium-term, and long-term solutions for the board to consider.

The Select Board met with their representative to the Reading Ice Arena Authority, Carl McFadden, to review the renewal of the town’s lease with the Authority for the Burbank Ice Arena. McFadden shared that sound management allowed the Authority to survive the pandemic and noted that $80,000 in capital improvements had been made to the facility this year. He also stated that roof repairs, estimated at $250,000, will also be needed in the near future

Select Board member Karen Herrick expressed concerns about what she considers transparency concerns for the Authority, including the lack of readily available financial audits, a listing of current board members, as well as publicly posted meetings. McFadden noted that financial audits were given to the town each year and that he was the board’s conduit for any questions they may have. “I want to make sure the building is being taken care of,” Herrick explained. She also asked that the Authority looks into installing solar panels on the roof while it is being repaired. “The timing is really good,” Herrick added.

After a public hearing, the Select Board voted 5-0 to place stop signs at the corner of Hillcrest Road and Prescott Street, as well as at the corner of Copeland Road and Prescott Street. By a 5-0 vote, the board appointed Bacci to the Symonds Way Exploratory Committee. The board also appointed residents to the Council on Aging, the Recreation Committee, and the Trails Committee by a vote of 5-0.

The board voted 4-1 to adjust the already voted on tax rate from a factor of .9965 to .996452. Town Assessor Victor Santaniello reported that the Department of Revenue requested a calculation to six figures and that the adjustment has no real effect on the October 25 Select Board decision regarding the tax rate split. Haley, the dissenting vote, stated that he was not in favor of the previous vote and thus was not in favor of the adjustment.

The board voted 5-0 to approve a letter of support seeking a “Safe Routes to School” grant the town is submitting. According to Town Manager Fidel Maltez, this is a competitive grant from the Massachusetts Department of Transportation that could provide funding for sidewalks on Hillside Road and replace and improve sidewalks on Oakland Road. Also included would be enhancements to the crosswalks at the intersection of Birch Meadow Drive and Oakland Road. 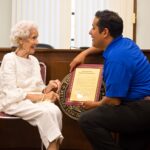 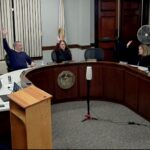