Reading, MA — In 1824, at the invitation of President James Monroe, the last living Revolutionary War General, the Marquis de Lafayette of France, made a historic journey to the United States. From his arrival in 1824 and through 1825, Lafayette toured the new nation with much fanfare, including a stop in Reading in June of 1825 at the Skinner Hotel, which was located on the current site of the Latham Law Office building in Downton Reading.

To commemorate this visit, a small committee headed by resident Peter Maguire sought to have a historical marker placed on the site where Lafayette greeted the gathered crowd. Maguire recalled coordinating with Lafayette Trails, Inc., which issued the challenge to verify Lafayette’s visit through primary sources historically.

Maguire shared that the sources discovered included a newspaper article from Concord, New Hampshire, about Lafayette’s journey and a first-hand account from the Reverend William Wakefield, who was present on the day Lafayette stopped in Reading. Maguire noted that Reading’s first doctor, John Brooks, who mustered the local militia to be ready for the Battles of Lexington and Concord in April of 1775, was a personal friend of Lafayette’s from their time of service together during the Revolution.

After a year of work, this past Friday, August 19, was the official unveiling of the marker, which was provided through a grant from the William G. Pomeroy Foundation.

Among those present were Representatives Brad Jones and Richard Haggerty, Town Manager Fidel Maltez, Select Board Vice-Chair Karen Herrick, and Dorothea Jensen from the nonprofit Lafayette Trails Inc., and Alan Hoffman, President of the American Friends of Lafayette Society.

After some fife music by Reading Memorial High School Band member Brenden Manning, Sophia Latham, daughter of attorney Christopher Latham, shared her family’s enthusiasm for the project. “We are proud that this property was part of the Marquis de Lafayette’s journey in the United States,” Latham commented. Both Jones and Haggerty also spoke of the importance of the project.

“Our shared history must be remembered and honored,” Haggerty declared.

Sharlene Reynolds Santo, representing the Reading Historical Society, continued the thought, “This marker is a reminder to our town of the contributions Lafayette made to the success of the American Revolution, the founding of our nation, and the role Reading played in our historical past,” Santo expressed.

Also among the guests was Anouk Dumas, Vice Consul of the Consulat de France in Boston. Dumas added to the narrative, sharing that Lafayette not only gave leadership to the American Revolution but also played a significant role in the presentation of the Declaration of the Rights of Man and Citizens to the French General Assembly in 1789. She continued sharing that Lafayette was committed to the principles of liberty for his entire life.

“[Lafayette’s] story is a testament to the enduring friendship between the United States and France, with intertwining destinies and lasting alliances,” Dumas added. “In honoring the past, we remind ourselves of the bonds between our two nations,” Dumas concluded.

The marker was then unveiled to the assembled crowd by Maguire, Dumas, and Latham. It can be viewed in the front garden of the Latham Law office building at 643 Main Street in Reading.

The Lafayette Trail, Inc. is a nonprofit organization with the mission to document, map, and mark General Lafayette’s footsteps during his Farewell Tour of the United States in 1824 and 1825. It aims to educate the public about the national significance of Lafayette’s Tour and to promote a broader understanding of Lafayette’s numerous contributions to American independence and national coherence in preparation for the 2024-2025 tour bicentennial celebrations. 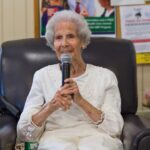 One Hundred Years for Sally Hoyt 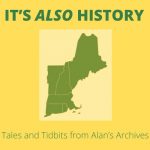