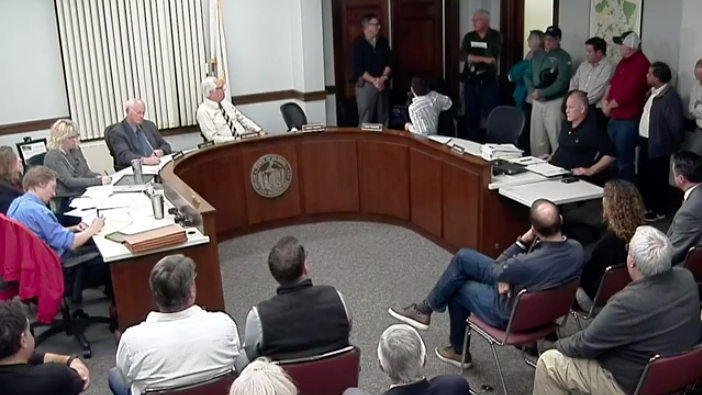 After a long discussion to determine whether or not to continue the public hearing, the Zoning Board of Appeals (ZBA) voted unanimously to deny the appeal of Louise Hillman of the Citizen’s Environmental League. Hillman was seeking to overturn the August 12 decision of the Community Planning and Development Commission (CPDC) approving the site plan review for a new playing field at Austin Preparatory School located at 101 Willow Street. Well over 50 people attended the hearing, which had been placed on the schedule on September 19. Hillman requested that the hearing be continued as she claimed to be unavailable for the October 16 meeting due to a family emergency.

Attorney Chris Latham, representing Austin Prep, urged the board not to continue the hearing, citing the number of people who had shown up to the meeting as well as stating that Austin Prep was “suffering hardship” due to the delay in getting their project underway. Latham also claimed that Hillman was seeking a delay, “hoping that donors will fade away and that the passage of time will prevent construction and use of the field.”

The site plan review was filed with the town on May 8 and was the subject of three separate CPDC meetings as well as three Conservation Commission meetings. Latham pointed out that Hillman attended no CPDC or Conservation Commission meetings, had no correspondence with the CPDC, and could not prove any real damages that she would suffer as a result of the field being constructed. ZBA chair Damase Caouette responded that town staff had had a great deal of trouble communicating with Hillman. Hillman requested the continuance through an email the day before the ZBA meeting. Caouette also stated that he did not know if Hillman had any connection to Reading, as she is not listed on the voter rolls or street census of the town. “I have a feeling this is not a serious appeal.” Caouette continued.

Latham argued that the hearing should not be continued and that the jurisdiction of the ZBA on the matter was unclear. Latham shared that Hillman did not have standing for an appeal for three reasons. First, that she is not an aggrieved party as she is not an abutter to Austin Prep, nor a citizen or property owner in Reading. A party who appeals to a planning decision must prove that they are personally aggrieved as a result of the decision, Latham explained. Second, the appeal was not filed on time. According to the bylaw, a person has 20 days to appeal a CPDC decision. The CPDC decision was filed with the Town Clerk on August 13 and thus any appeal needed to be filed by September 3. On September 4, Austin Prep received a certified plan from the Town Clerk which stated that no appeal had been filed. The letter requesting an appeal arrived through regular mail at Town Hall on September 6. Finally, Latham also argued that the appeal had not been properly filed as it was not addressed to the ZBA as is required by the bylaw and contained no indication as to why the decision should be appealed.

Latham then explained that Austin Prep had suffered “loss of advantageous financial opportunities, loss of time, and had incurred additional expense as a result of the appeal and that even a two-week continuance could prevent the fields from being ready for the 2020-21 school year. Caouette also made clear that any hearing that ZBA would hold would not try to second guess the work of the CPDC or the Conservation Commission, but would seek to ensure that the process had been followed properly.

Steve Chapman, an abutter to the project spoke to the ZBA stating that he was in an awkward position. He is against the project and went to all the meetings, but he believed that there was no basis for appeal. “The process has been followed all the way through,” Chapman commented. ZBA member John Jarema agreed, “CPDC has done its job, [Hillman] has not done her job.” The ZBA then voted 4-0 to deny the continuance. ZBA member Robert Redfern had recused himself from the discussion and from the vote due to a potential conflict of interest.

After only a few more minutes of discussion, the appeal was also denied, given that the burden of proof was on Hillman, who was not at the hearing nor had she sent a proxy. “To protect the integrity of the process, I don’t see how [the appeal] can go forward.” ZBA member Nick Pernice stated.

ZBA also voted 5-0 to amend a special permit to allow Wade and Lorraine Willwerth of 26 Green Street to convert storage space above their garage into a family room. ZBA also voted 5-0 to grant a special permit allowing the Willwerths to enclose an existing deck on the rear of their home. There is no change to the footprint of the home, and neither change will be viewable from the street. ZBA voted 5-0 to continue a public hearing for 104 Salem Street until November 20. It is likely that the developer’s issue will be settled with the town before that date.