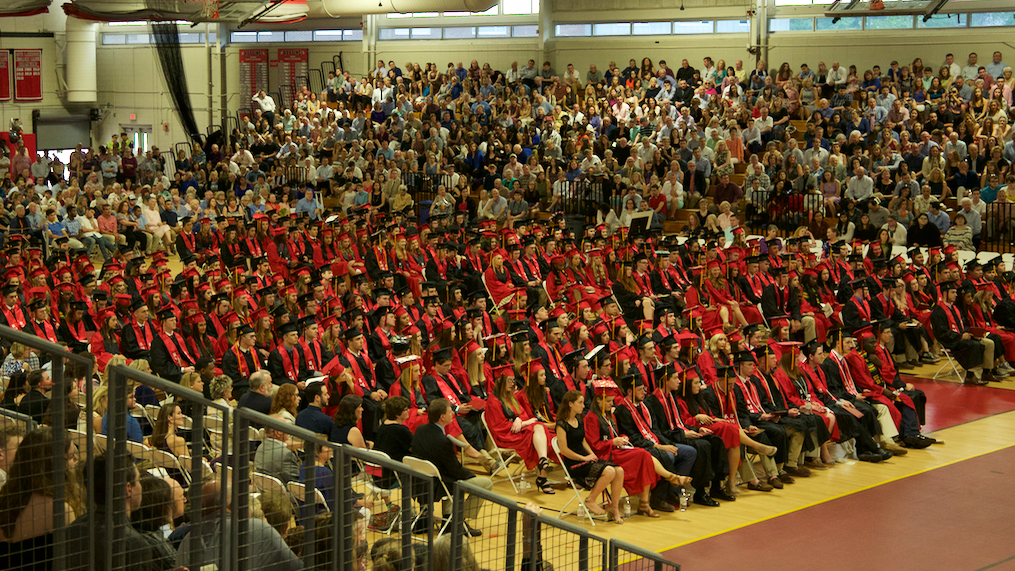 The Band Parents Award, in memory of Joseph McGillicuddy, is presented to RMHS Marching Band members who have shown excellent musicianship, leadership, character and concern for others.

The Band Parents Award, in memory of Steven Calla, a former drummer who left his mark of courage and spirit on the RMHS band program, is presented to a member of the band program who has shown musical talent, leadership, character and a love of family and friends.

The Class of ’64 Award, to honor those who fought in the Vietnam War, is given to an outstanding member of the RMHS community who has demonstrated excellence of scholarship, character, and personality.

The Scott Connolly Memorial Award is given to a deserving graduate who is hard working, tenacious, friendly, respectful and compassionate toward others.

The Hal Croft – RMHS Award is given to outstanding graduates for integrity and sincerity in the community and in track and field.

The Nathaniel G. Hill Award is given to a worthy student for his/her further education, be it college, junior college or trade school.

The James E. Klepeis, Jr. Science Award is given to a college or university bound RMHS student who has displayed an interest in and aptitude for the field of science.

The Dennis Lehane Memorial Scholarship is given in memory of Dennis Lehane, Class of 1992, to a senior who will be attending a college or university, and who has displayed exemplary courage, determination, and team spirit while participating in track, football, or both while at RMHS.

The Sally Merchant Award, given by the Young Women’s League of Reading, in memory of an outstanding teacher, is presented to a deserving member of the graduating class advancing to a college education.

The Young Womens League Scholarship is awarded to a graduating female student, with a minimum 3.0 GPS, advancing to a college education, who has proven to be an active community member, has shown dedication to community service, and demonstrates leadership.

The Florence G. Nichols Scholarship is presented to a girl in the senior class moving on to advanced education who has demonstrated great mental and physical ability as well as leadership.

The William E. Endslow Scholarship recognizes a senior who has consistently held himself or herself to the highest standards of excellence in the areas of leadership, community service and drama. This student exemplifies the true spirit of the Reading Memorial High School Drama.

The S. Edwin Shin Memorial Award is presented to a graduate outstanding in instrumental music and science.

The Parents Supporting Student Theatre Award recognizes seniors who have consistently held themselves to the highest standards of excellence in the areas of leadership, community service and drama. These students exemplify the true spirit of the RMHS Drama Club and demonstrate a passionate dedication to Theatre Arts.

The P.T.O. Exemplary Character Award is presented to members of the graduating class who have made special contributions to the high school community.

The Ellen Carlin Endslow Drama Scholarship is awarded to a senior who has developed a passion for Theatre Arts during his or her time in the Reading Public Schools. The recipient embodies a belief in collaboration and teamwork as well as an appreciation for visual, auditory, artistic, and communication skills.

The School Committee Prize is presented to a member of the graduating class in recognition of outstanding scholarship, character and personality.

The Arthur L. Spencer Memorial Award is given in memory of an outstanding member of the Foreign Language Department to a senior who has excelled in foreign language with a special emphasis in Latin.

The Patrick A Schettini, Jr. Memorial Scholarship is given to a student who plans to pursue a degree in one of the STEM (Science, Technology, Engineering, or Mathematics) fields, has strong academic performance and significant community service.

The Assistant Principal Awards for students whose perseverance led to significant personal growth.

The Principal Awards for distinguished students who exemplify the Core Values of Reading Memorial High School.

The Kenneth L. Brown Award, Class of 1942, is given to the young man with the highest grade-point average in English during his senior year.

The RMHS School Publications Awards in recognition of 4 years of leadership and service to RMHS Literary Publications.

The Boston Section of the Society of Women Engineers presented certificates of merit to students in recognition of three years of excellence in Science and Mathematics.

The Knights of Columbus Award is given to students in recognition of their continuous high level of service to the community throughout their career at RMHS.

The Gregory P. Zager Scholarship, in memory of a 2008 graduate, recognizes a student in the senior class who is a positive member of the community and has persevered over time, shown determination, and has grown as an individual and student.

The Friends of Reading Football Award is presented to two members of the graduating class who have been members of the football program for at least two years, have a record of demonstrating leadership, good moral character and solid academic performance.

The Leo Club Award is given to a deserving student who has been a loyal member of the club for four years, volunteering for numerous events, and has been an excellent leader and role model demonstrating the importance of giving back to his or her school and community.

The Patrick A. Schettini, Jr. Library Award is given to students who exhibit strong leadership skills and have dedicated their time to making our library a better place.

The Robotics Awards are given by the Reading Engineering Team for leadership in engineering and entrepreneurship.

The Althea M. Russell Scholarship recognizes a student for their academic excellence, generosity, selflessness and a spirit of leadership at RMHS and in the Reading community.

The Reading Society of Craftsmen is given in recognition of a student’s extraordinary skill and creativity in art, especially in 2 and 3 dimensional media.

Human Relations Advisory Committee Award is given in recognition of students who are committed to promoting and celebrating diversity in the Reading community.

The Garth Scott Hockey Award is presented to a senior member of the varsity hockey team with a dedication to further academic pursuits via a 4-year degree, and who has displayed sportsmanship both on and off the ice.