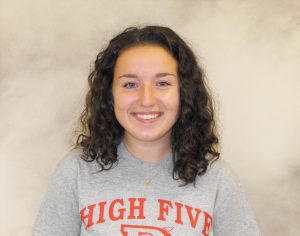 Nicole Joyal, class of 2017, is being recognized for her excellence and leadership in scholarship, athletics, activities, and service. Nicole is in the Top 2% academically and is a two-year member of the Century Club, as well as the National Honor Society. She also excels athletically, playing as a four-year member of the Girls Varsity Soccer Team and this year, serves as one of the team’s captains. Nicole is also a three-year member of the Student Council, acting as one of the co-presidents during 2016-17 year and helping to ensure that RMHS is a welcoming and supportive school community. She is also a member of the Mock Trial Club, participating as a lawyer in last year’s trials. Nicole has also been a three-year member of the Drama Club participating in both cast and crew. Most recently, she was the hair-mistress in Around the World in 80 Days. She has also contributed her time as an Upper Connector over the past two years, helping incoming freshmen to transition successfully. Lastly, Nicole volunteers her time as a youth soccer coach in the summers, mentoring 9 -12 year olds in the Reading Community to be better players and individuals. Next year, Nicole plans on attending college and is currently undecided about her major. Congratulations, Nicole! 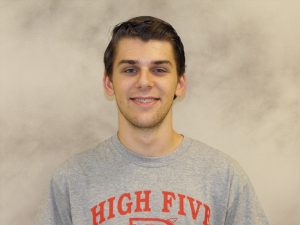 Travis Giragosian, class of 2017, is being recognized for his outstanding achievement and leadership in scholarship, drama, music, and service. Travis ranks in the Top 3% academically and is a member of the National Honor Society and Century Club. He has been a four-year member of the Drama Club, and serves this year as the Treasurer. Travis will be participating in the 10th Show of his acting career at RMHS and most recently earned the lead role as “Robbie Hart” in the upcoming production of The Wedding Singer. He has also performed in lead roles of recent productions including Poe in An Evening with Edgar Allan Poe and Mr. Banks in Mary Poppins. Travis is also the President and a four-year member of the Male Select Choir, The Crescendudes, as well as the RMHS Singers and the Shakespeare Society. Despite his busy schedule, Travis also volunteers his time by playing guitar and singing at the First Congregational Church in Reading, as well as participating in City Reach Boston, an organization dedicated to helping the homeless. Lastly, many of you may have seen Travis displaying his culinary talents making burritos at Chipotle here in Reading! Next year, Travis will be attending college and pursuing a Biology major with a Pre-med track.