Sunday night August 7th featured the debut of the new director of the Reading Civic Concert Band, Catherine Hofius.  After an extensive talent search, Hofius, a graduate of Georgia State University, with a Master’s Degree in Instrumental Conducting was awarded the post. She is currently director of bands for the Andover public school system, and has been rehearsing the Civic Concert Band through July. “Catherine brings a lot of energy to the group,” Civic Concert Band Board President Keith Pedersen said.  “She is also bringing back students to the band, which was why we got started originally.” This inaugural concert came as part of Reading’s free summer Concert On The Common series sponsored by the Reading Recreation Division.

The theme of Sunday’s concert was “Fun” and featured American music from Disney movies and the film Exodus as well as some traditional marches including the Boston Subway March.  “It was lots of fun.” Hofius commented afterward, “We had a larger audience than I thought would be out on a hot day”  The concert was attended and enjoyed by about 100 people sprawled across Reading Common. The Band will be performing next as part of the Reading Fall Street Faire on Sunday, September 11th.

There is no gallery selected or the gallery was deleted.

The Reading Civic Concert Band started in 1994 as a summer-only group, led by Cara Canady, then director of bands at Birch Meadow Middle School.  Her concept was to engage developing wind players in a healthy summer activity and to include adults from the community.  When Canady left to take another teaching position, she was succeeded by Cheryl Wing for a couple years.  When Wing’s teaching duties grew, band members approached one of their trumpet players, Lucinda Ellert, and asked if she would consider taking over and reorganizing the group into a year-round concert new band. In 2004, the Reading Civic Concert Band was reformed with a new charter and bylaws. The outreach to the community at large still includes young players and the programming concept includes serious wind repertoire as well as fun tunes that are accessible to all. 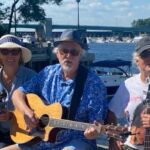