Reading, MA — Community Development Director Julie Mercier presented the Select Board with suggestions from the Parking Traffic Transportation Task Force (PTTTF) for changes to the structure of downtown parking. Mercier reported that there are 140 businesses downtown, 70% of which have fewer than ten employees. This, combined with commuters and shoppers, have created a challenging situation for parking in the area. Mercier proposed two levels of changes to begin to address the issue, the first, referred to as “surgical fixes to discrete problems” include abolishing the space leasing program, making adjustments to the resident community access sticker, fixes to how spaces are managed in the Senior Center and Brande Court lots, removing some overnight exemptions, and reminding the public that the Town Hall lot is open on Fridays and Saturdays. According to Mercier, these small changes could open a few spaces and simplify regulations. 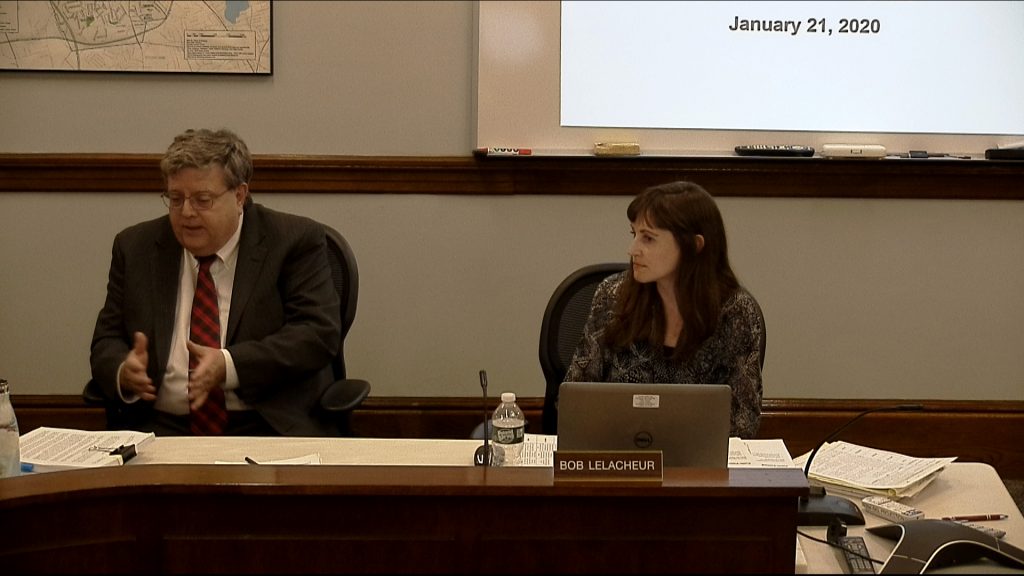 In the same vein, Mercier suggested: “system-wide modifications” which again would simplify the regulations downtown and address the goal of expanding access to the “inner core” of downtown to shoppers. “[These are] small changes with big impact.” Mercier described. Downtown currently has 350 on-street public spaces and 175 public spaces in parking lots. The recommendation is to make all public spaces downtown two-hour parking with a few 30-minute spaces. There would be no employee parking in public spaces in the inner core. It was pointed out that several businesses do have their own private lots for employees. Employee parking would be expanded in the “outer core” with more permits made available, possibly on Woburn Street. Mercier also suggested that to “give a little back” and incentivize the use of the employee permits that they could be changed to free-of-charge. Mercier also argued that none of the outer core spaces are more than a ten-minute walk from the inner core businesses. 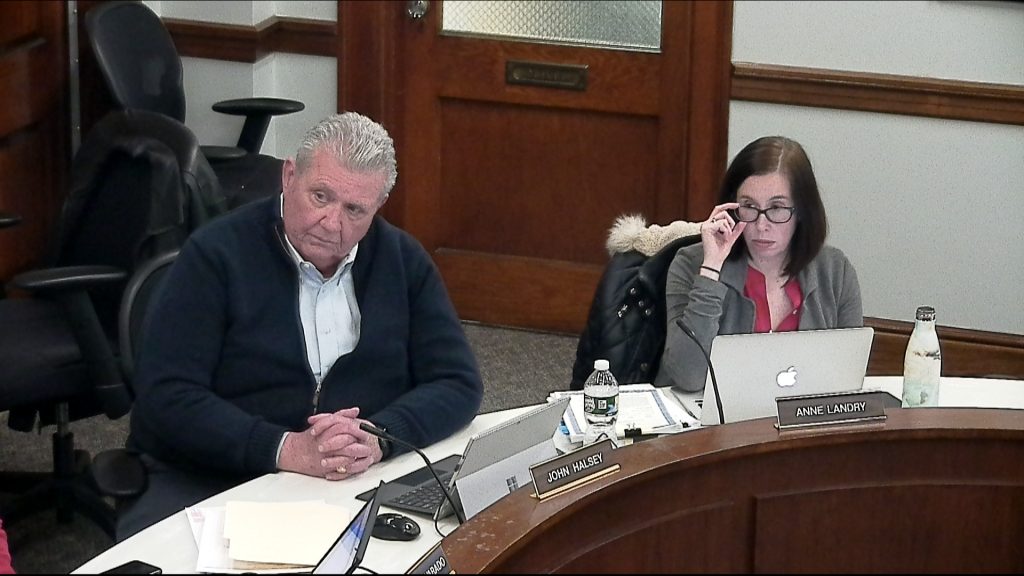 Select Board member John Halsey suggested, “We need to be aggressive with some radical solutions.” Chair Vanessa Alvarado noted that the changes could push some commuter parking into the neighborhoods. Mercier also suggested that consideration could be given to making the public lots paid lots with kiosks. The Select Board will hold a public hearing on February 4 to hear from stakeholders regarding the proposals. “[The public] are more likely to support [the changes] if they have a voice.” Select Board member Andrew Freidmann commented. If the board votes to change regulations, the changes would likely go into effect in July.

Several members of the Middlesex Avenue neighborhood expressed concern to the Select Board during public comment regarding the disposition of the former Daniels House property. The property has been sold and the plan is for a “sober house” to occupy the building. Residents expressed dismay over the fact that the facility will be run by a for-profit business that is virtually unregulated by the state. “They can say they have 27 residents, but put in 75. They can say they have a one to five ratio for staff to clients, but really have one to 75.” one resident explained. A case was cited in Wakefield, where a similar facility was believed to be a single-family home. When the fire department entered the home for a call it was revealed that the house had over 50 residents. Wakefield was informed that it could not impose restrictions on residency in the facility. Another resident expressed concern over the proximity to the library, wondering if the library would become an “unregulated rec. room” for facility residents. Town Manager Robert LeLacheur said that there will be a community meeting regarding the issue at the Reading Public Library on January 30 at 7:00 pm, while commenting that there was likely little that the town government could do about the situation. The new owner of the building and the business owner both have stated that they will be at the meeting.

Town Clerk Laura Gemme reported that she is currently 60 election workers short for the March 3 election. She asked that the board give aid in seeking additional workers for the day. The Select Board voted 5-0 to sell $6,065,000 of debt for ten years with an average interest rate of 1.062%.

The board also voted 5-0 to dissolve the RMLD Dividend Committee as it had little to do, though concern was expressed over the direction the RMLD Board of Commissioners was taking toward the annual payment to the town. There is the possibility that the payment could be reduced by as much as $500,000.

LeLacheur gave the board an update on the building security project, suggesting the project will cost $4.5 million. This will rebuild and update the dispatch center, create stricter access controls to buildings, provide for updated wiring for an increased number of cameras, and for the “hardening” of the entrances to the schools. Cameras will be able to communicate with dispatch, will be forensic in nature, but will not be staffed regularly. The work is expected to begin in June with most of the work in the schools being accomplished during the summertime. LeLacheur referred to the work to get to this point as a “detailed and rigorous process” and believed that a substantial portion of the project will be completed within a year. 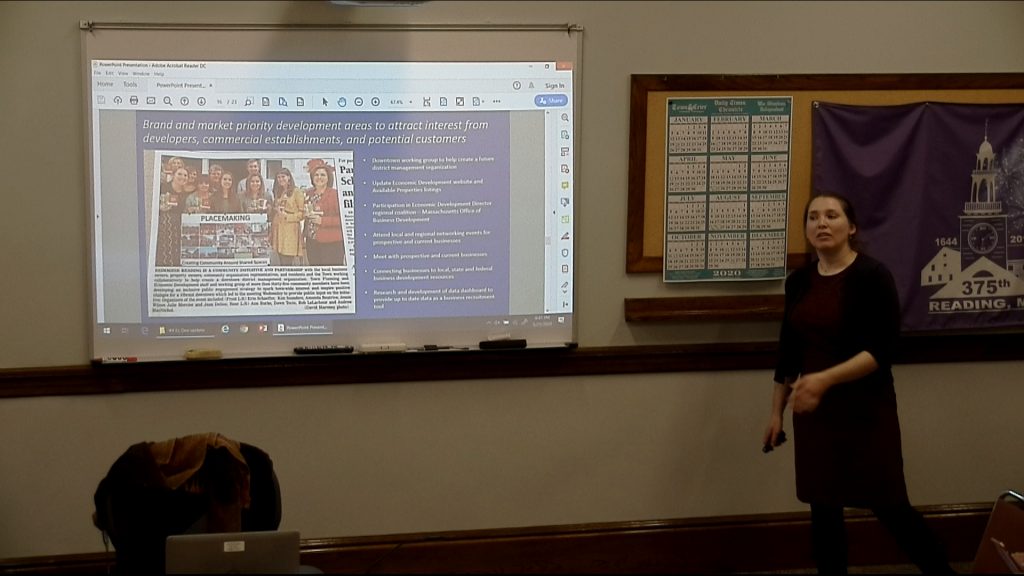 Economic Development Director Erin Schaeffer gave the board an update on the activities of her department. Schaeffer commented on the process, which she referred to as the “creating and sustaining of wealth” for the community. She reported regarding continued efforts to promote the downtown and the “eastern gateway” into Reading. She also shared regarding efforts to enhance walkability and bikeability in Reading. This conversation led to a report from the Select Board’s Economic Development Sub-Committee and its work to establish a Downtown Economic Steering Committee. While progress has been made, Alvarado suggested that the plan for the committee’s work seemed to overlap too much with Schaeffer’s work. The board asked the sub-committee to rework this part of its plan.