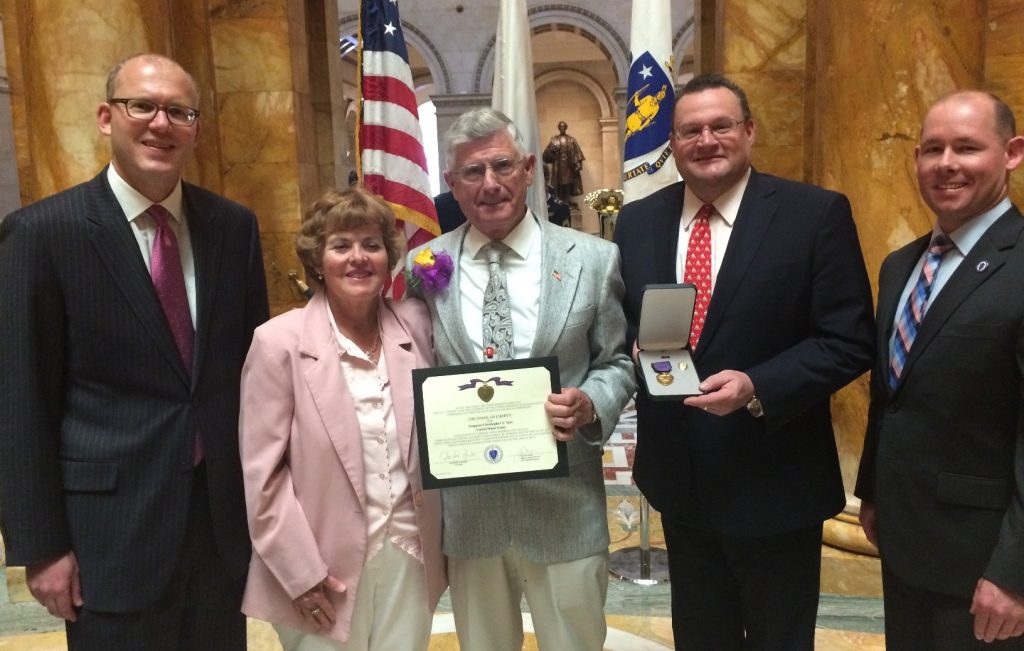 House Docket 4731 would allow individuals who have been awarded the Medal of Liberty to obtain a special registration plate free of charge from the Registry of Motor Vehicles bearing an image of the medal. The bill was filed at the request of Reading resident Arthur Vars, who received the Medal of Liberty on May 22, 2019 on behalf of his uncle, US Army Sgt. Christopher Young Vars, a World War II and Korean War veteran who died while being held as a prisoner of war in Pyoktong, North Korea.

Created in 2009, the Massachusetts Medal of Liberty is awarded in conformance with the standards and protocol of the Purple Heart and is provided to the next of kin of service men and women from the Commonwealth who were killed in action, died in service while in a designated combat area in the line of duty, or died as a result of wounds received in action. Qualifying family members are eligible for one medal, and recipients are selected by a three-member commission comprised of the state’s Adjutant General and two field grade officers.

To date, the Medal of Liberty has been awarded over 500 times. However, it is estimated that at least 8,500 families may be eligible for this military honor.

“The Medal of Liberty recognizes the families of the Commonwealth’s fallen service members who have made the ultimate sacrifice for our nation,” said Representative Jones. “By creating a Medal of Liberty license plate, we can further honor these families while also raising awareness of this special state-issued military honor.”

“We must never forget the sacrifice of those service members who have died for our nation and their families,” said Representative Haggerty. “This Medal of Liberty license plate is a fitting tribute and a constant reminder of the price that has been paid for our many freedoms we have today.”

“The Medal of Liberty is a unique and solemn honor that the Commonwealth of Massachusetts extends to Gold Star relatives of members of the armed services killed in action,” said Senator Lewis. “Military families also make incredible sacrifices, and the Medal of Liberty license plate would be another way to recognize and celebrate our service members and their families.”

House Docket 4731 has received bipartisan support in the House and Senate, and currently has a total of 51 legislative co-sponsors. The bill has been referred to the Joint Committee on Transportation, where it will be scheduled for a public hearing.

More information about the Medal of Liberty is available on the Massachusetts National Guard website athttps://www.massnationalguard.org/images/Docs/Medal-of-Liberty-2019.pdf.