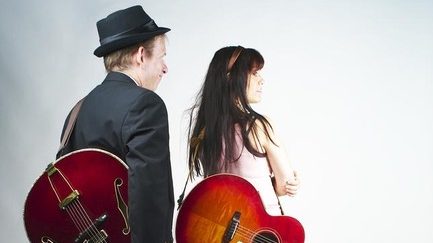 The Linden Tree Coffeehouse is excited to bring back Pete and Maura Kennedy to Wakefield on Saturday, April 6th at 8 pm. Often seen on festival stages around the country, their visits to coffeehouses are extra special. The Kennedys are an American folk-rock band recognized for their harmonies and instrumental prowess, blending elements of country music, bluegrass, Western swing, and janglepop. Often a few Beatles tunes in their sets.

The Kennedys began performing together in 1992, shortly after they met while on the road with Nanci Griffith. The pair’s musical influences are quite eclectic from Buddy Holly, the Everly Brothers, the Beatles, and the Byrds, but also jazz, blues, and world music. With over 14 recordings as the Kennedys and many recorded individually and with others, Pete and Maura have no plans to slow down either on tour or in creating music.

Safe Until Tomorrow is their 2018 CD and like previous ones, has been described as uplifting, empowering, and encouraging. The title song is for those support caregivers, the self-sacrificing ones who put aside their own lives to help others. This album includes several rocking songs of social consciousness that convey a strong message best summed up in one of the song titles, “Be Silent No More.” The song started as a civil rights anthem, but with the groundswell of the Me Too and Never Again movement, its resonance has expanded day by day.