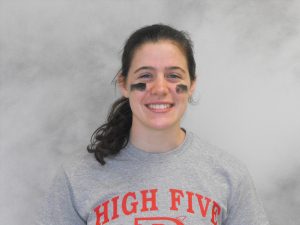 Molly is being recognized for her excellence in academics, athletics, and service. Academically, Molly is in the top 10% of the Class of 2018 and has distinguished herself as a member and officer of the National Honor Society. She has earned High Honors consistently throughout her career at RMHS, and this year has continued to challenge herself by taking a rigorous course load including four Advanced Placement courses. She was also awarded a Bronze Medal last year for her outstanding performance on the National Spanish Exam. In terms of extracurricular activities, Molly has excelled as a member of the Girls Varsity Swim Team since her sophomore year, and helped the Lady Rockets win the Division 2 State Championship last year. She also swims for the Burbank YMCA Bluefins, placing in the top 10 in the 100-yard backstroke and the 200-yard freestyle at the 2017 YMCA New England Championship Meet. Musically, Molly performs as the 2nd chair trombone for the RMHS Jazz Ensemble, which was awarded a Gold Medal at the Massachusetts Association for Jazz Education State Finals in both 2016 and 2017, and later went on to play at the Hatch Shell in Boston. She rounds out her musical accomplishments by playing euphonium in the Symphonic Band. In terms of service, Molly volunteered in the summer as a Leader-in-Training at the Joppa Flats Mass Audubon Camp, helping children ages 6-13 to explore the North Shore habitats and wildlife. She also works and coaches at the Boston Rock Gym as a belayer and assists as a summer camp counselor at the International Rock Climbing School. Molly even finds the time to coach a swim team for the Burbank YMCA Bluefins, as well as helping to run band competitions here at the high school. Next year, Molly hopes to attend the United States Naval Academy to pursue a degree in ecology, environmental science, or oceanography. 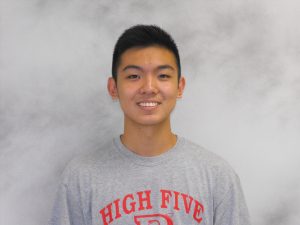 Charles is being recognized for his outstanding achievement in scholarship, athletics, leadership, and service. Academically, Charles is in the top 10% of the Senior Class and is a member of the National Honor Society and Spanish National Honor Society. Earning High Honors throughout his career at RMHS, he has consistently challenged himself–taking eight Advanced Placement courses and receiving Century Club recognition for his academic performance. Last year, Charles earned the Scholarship Award in Mathematics, as well as the University of Rochester George Eastman Young Leaders Book Award. He was also awarded the Middlesex League Service, Integrity, Leadership, and Spirit–or SILS Award– for his well-rounded accomplishments and leadership. In terms of extracurricular activities, Charles has proudly served as the President of the Class of 2018 for the past three years. He also serves as president for both the Red Cross Club and Chess Club. Athletically, Charles has been a two-year captain of the Boys Varsity Tennis Team, and has earned Middlesex League All-Star recognition over the past two seasons. He is most proud, however, of last season’s night match that showcased the Rocket Tennis Team defeating a talented St. John’s Prep Team. In addition to his activities, clubs, and sports, Charles makes time to volunteer at Lahey Clinic, assisting at an in-patient unit, as well as helping at the Directory as needed. He also has volunteered as a camp counselor over the past four years with the Cross Bridge Church in Lexington, where he helped facilitate bible study, as well as games and activities. This past summer, Charles continued his commitment to service and his church by helping economically disadvantaged children in Brooklyn by serving as a camp counselor and religious teacher for two weeks. He also volunteers at a food pantry in Lynn and tutors his peers in Chemistry, Algebra 2, Pre-calculus, and Geometry. Last but not least, Charles did an outstanding job this past Wednesday evening as the “Voice of the Bell” at the Back to School Night event. Next year, Charles will attend college and is currently undecided but is considering a career in medicine, as a pediatrician.