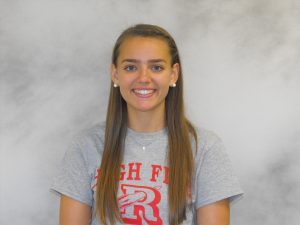 Kathleen is being recognized for her outstanding accomplishments in academics, leadership, extracurricular activities, and service. Kathleen is in the top 10% of the Class of 2018. She has consistently earned High Honors throughout her career at RMHS and has been a member of the National Honor Society since last year and the Century Club in her sophomore and junior years. Last year, she was awarded the Middlesex League SILS Award, which is given to select students in the Middlesex League who have most exemplified the qualities of service, integrity, leadership, and spirit. Kathleen has also received the Scholarship Award in theater and the 11th grade Responsibility Award, as well as the University of Massachusetts Book Award for exceptional academic accomplishments and contributions to the school community. In terms of extracurricular activities, Kathleen has been a four-year member of the Drama Club and serves this year as the club’s secretary. She has also been a four-year member of Samantha’s Harvest Club and a 4-year member of School Council. She has been a three-year member of Girl Rising Club and a two-year member of the ALS Knights Club, helping to raise money to find a cure for ALS. Most recently, Kathleen served as an Upper Connector during this year’s Freshman Orientation and as Master of Ceremony for the first meeting of the year for Reading Public Schools’ teachers and staff. In terms of service, Kathleen volunteers for PAWS animal shelter in Wakefield and Lahey Clinic in Burlington, assisting the nurse management staff. She also volunteers with the Parker and Coolidge Middle School Drama Club productions. Next year, Kathleen plans to attend college where she will pursue Forensic Science on a Pre-Med track and a minor in Technical Theater. 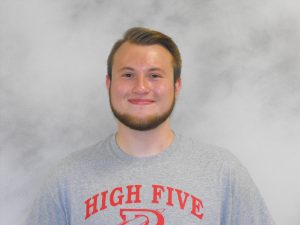 Logan is being recognized for excellence in scholarship, activities, service, and leadership. Logan is in the top 10% of the Senior Class and has been a member of the Century Club for the past two years. He has also been a member of the National Honor Society where he serves as the Service Project Leader. Logan proudly serves as the Vice President of the Senior Class and is a member of the A World of Difference Club, where he was a key contributor to the Resolution of Respect, which was created last year to combat hate and prejudice. Several weeks ago, Logan served as an Upper Connector, where he helped during Freshman Orientation with the transition of 9th graders to the high school. He was also awarded the Scholarship Award in Instrumental Music for the past two years and the Respect Award for his 10th grade year. He also received the Bryant University Book Award last year, which was given to a student in the top 10% of their class who most exemplified leadership and who had earned the respect of both his peers and the staff. In terms of activities, Logan is a member and the President of both the Model United Nations Club and the Symphonic Band. For the last two years, he earned All-State recognition by the Massachusetts Music Educators Association for his performance as a bassoonist. He has also been selected as a Principal Bassoonist of the Northeastern Massachusetts Youth Orchestra for the past four years and performed with the Boston Youth Symphony Orchestra for the past two. Logan also won the Trudy Larson Scholarship Award for his outstanding performance in music. In terms of service, Logan has participated in the Red Cross Club for the past three years and helps to coordinate the blood drives here at RMHS. He also volunteers his time at the Rehabilitation & Nursing Center in Everett and participated on the Reading Public Schools Late Start Committee to explore whether or not schools should begin at a later time. Next year, Logan plans to attend college and is interested in pursuing a Pre-Med track as well as a minor in bassoon performance.