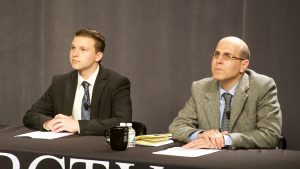 Carl Anderson IV and Nicholas Boivin, candidates for the two-year position on the School Committee, took part in a forum at RCTV on Monday evening at which they discussed several issues at stake in this year’s election. Each candidate began with a brief opening statement. Boivin, who was selected by the School Committee to fill a vacancy at the end of last year, shared that he is running as a “concerned parent and taxpayer” of Reading. He hopes to bring experience that he has gained in his professional arena balancing multi-million dollar budgets to the school committee. Anderson, a sophomore at Merrimack College and recent graduate of Reading Memorial High School, feels that he brings a unique perspective as to what strengths and weaknesses Reading Public Schools have and how to begin to change the weaknesses. 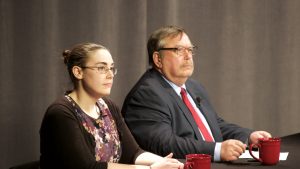 The question phase of the forum was moderated by Alan Foulds and questions were asked by Catherine Robertson and John Carpenter. Both candidates were cautious about a future override, Boivin mentioning that lessons needed to be learned from last October’s failure and that the town should not just jump into another override attempt. Anderson believes that an override may be needed, but that every possible cut should be made first to balance the budget. Neither candidate has participated in the evaluation process of the superintendent, but both expressed views about it. While the process is done to state standards, Boivin feels that the views of the board majority can be expressed more clearly to the superintendent. Anderson suggested that his conversations with voters show a lack of trust in the administration and that he would be willing to ask the tough questions that were needed to rebuild that trust.

When questioned about needed policy changes, Anderson suggested that the clear paths to calculus for middle school math that were changed in 2012 have led to issues that need to be addressed. Boivin wants a closer look at the proposed changes to the track system in the high school before agreeing to it. 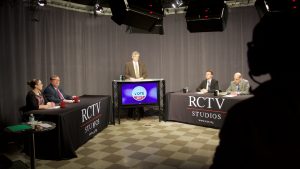 Anderson spoke passionately about his concern over teacher turnover, citing a Facebook post by a former Reading teacher that stated, “Reading is no longer a desired community to teach in.” He wants to walk the schools, talk with teachers, and get to the bottom of the assumed morale problems in our school staff. Boivin wonders how the number of support staff compares with other communities and feels this issue may be at the root of the “Tenure vs. Turnover” issue. Both candidates indicated that budget issues were their greatest concern for the coming year. 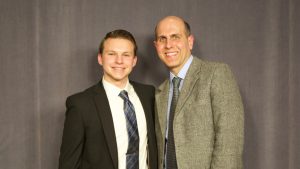 In his closing statement Boivin promised to “Support the student, defend the taxpayer, and value the educator” in all choices he would make if elected. Anderson declared that he would, “Work to represent all my constituents and bring back trust in our local government.” The entire forum may be viewed on RCTV’s YouTube page. The election will be held on April 4 at the Hawkes Field House.