“The collaboration between government and business is important, they work hand in hand together. We were thrilled to have the governor. We were happy to host such a high-caliber speaker,” Lisa Egan, director of the Chamber commented. 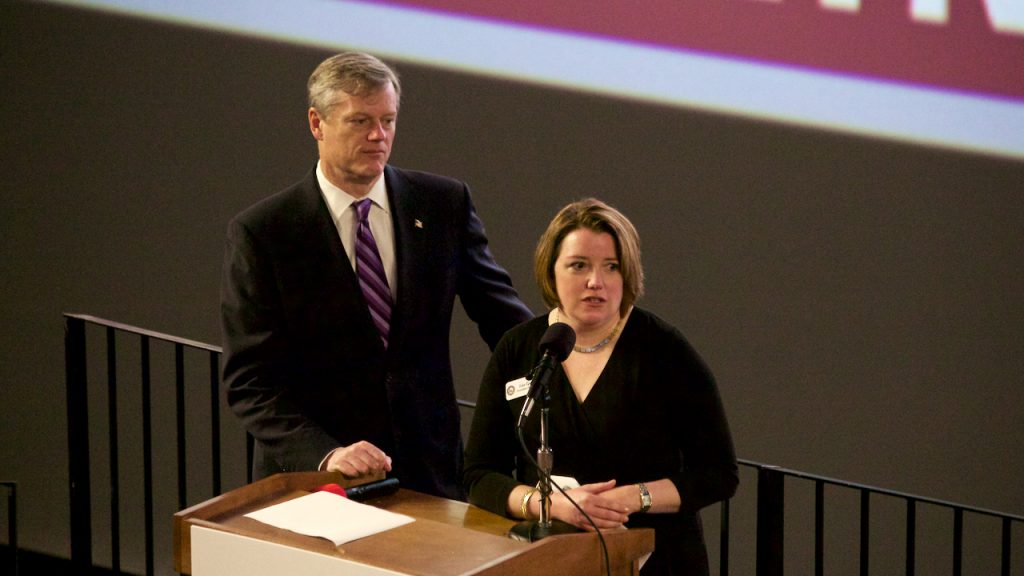 The governor began by stating that the first goal of his administration when he took office was to rebuild relationships between the Commonwealth and its cities and towns.

“For us to be truly successful, we have to build 351 strong communities, 351 places where people feel things are headed in the right direction.” he commented.

To that aim, the Baker highlighted his continued support of local aid and K-12 education funding as evidence. Remembering his time as a member of his local board of selectmen, Baker also pointed to legislation that he proposed that helped modernize and update regulations that municipalities have to adhere to, some of which were completely antiquated. He also mentioned his economic development legislation that would help communities redevelop “brown spaces”, land that had been previously been developed, rather than developing newer, pristine green space in their communities.

Baker then spoke about positive change his administration has made in the Department of Children and Families, increasing the number of staff, reorganizing staff responsibilities and helping the department develop better relationships with the court system. All these changes have led to what the governor believes is a better department to serve the needs of families and children most at risk around the state. The governor also highlighted his work with communities to reduce the numbers of homeless families housed in hotels and motels around the state. Baker continued by mentioning his administration’s work to fix the state’s Health Connector, which now has over 260,000 enrollees. The governor referred to all this effort, and the state’s unemployment rate which is second best in the country, when he cited the recent U.S. News and World Report article that listed Massachusetts as the best state in the nation in which to live.

The governor ended his time with the members of the Chamber recognizing the importance of collaboration with those with whom he may disagree. He cited his first appointment upon inauguration as governor being a Democrat as a signal that he wanted to work with the other party to bring about what was best for the state. Reading Town Manager Robert LeLacheur pointed to this event as well as a sign about the collaboration that was to come. Baker also recalled getting together to listen to a local official who had opposed him in the election only days after being elected.

“In the end, what people expect of us is that we collaborate, to work together and get stuff done on behalf of the people of Massachusetts.” the governor continued. “If we build 351 successful communities, a lot of the other stuff will take care of itself.”

Eliot Tatleman of Jordan’s Furniture was excited to be able to host the event at his furniture store. “Any time we can help the town, we are here for it,” Tatleman commented. “To have the governor come and use the IMAX theater is an honor.”