Reading, MA — Reading Public Schools METCO Director Kurtis Martin and Harvard University Doctoral Fellow Joseph Longbottom shared insights from Longbottom’s series of “empathy interviews” that he has been undertaking regarding Reading’s METCO program. Longbottom has spoken at length with students, staff, and parents to help gauge the strengths and growth areas for the program. Longbottom shared a series of criteria as to how a successful program could be measured, including academic achievement, enrollment, graduation rates, sense of student belonging, and “family experience” for both Boston and Reading resident families.

Longbottom reported that bright spots in the program include the increase in enrollment this year, the school counselor/METCO coordinator positions at each school, the increased availability of late buses, and a commitment to the vision that “Every student [in the district] is a METCO student.” He especially praised that the school counselor/METCO coordinators were leaders of color who are working to improve student and family relations for all students in the school using their split roles, the first of their kind in Massachusetts. “Reading Public Schools is a METCO district,” Longbottom exclaimed.

Other positive outliers noted include the Students of Color and Allies group at Reading Memorial High School, tours of Historically Black Colleges and Universities, the Affinity groups at Joshua Eaton Elementary School, and the Mentoring program at Killam Elementary School.

Longbottom also indicated some areas of challenge for the district, such as small and uneven numbers of Boston resident students in each grade and school and the need for a clear vision of what success looks like for the METCO coordinators. Longbottom recommended continued engagement with the METCO coordinators to develop their roles and responsibilities.

Korrey Lacey-Buggs, the School Counselor/METCO Coordinator at Killam, shared her day-to-day activities and an explanation of the mentoring program she has encouraged at Killam. She has charged staff members to seek to mentor Boston resident students in their school to provide support and encouragement. “Every child should have one adult in the building that they can count on,” Lacey-Buggs explained. She reported that she had been pleased with the level of interest from staff members in mentoring, including from custodial staff and cafeteria workers. “It’s incredible to see everyone’s commitment to student belonging,” Lacey-Buggs concluded.

Similarly, Theodore Henderson-Brown, the School Counselor/METCO Coordinator at Joshua Eaton, shared his experience. “Just being present [in the school] is the biggest thing,” Henderson-Brown commented. He also noted that being a part of the building leadership team has helped guide his work of “helping students have success each day.” Responding to a question from School Committee member Carla Nazzaro, Henderson-Brown explained the Affinity groups as students who come together during lunchtime once a week to share their experiences in a safe space. Henderson-Brown indicated that his biggest surprise in taking on his role was the level of connection he has had with parents in Reading.

After the presentation, School Committee Thomas Wise indicated that though he has always supported the METCO program, after hearing from the presenters, “I am even more bought in than I was before.” Martin closed the discussion by stating, “This is how we build a just society – working together.”

Only one member of the public, Geoffrey Coram, posed a question during the required public hearing for the Fiscal Year 2024 budget. Corm inquired as to how the district found the funding to make the proposed assistant principal positions at the elementary schools sustainable. Director of Finance Susan Bottan answered that leveraging various savings and costs across the budget, including efficiencies in the Special Education cost center, has allowed the assistant principals to be funded.

During the committee’s budget discussion, Wise indicated his nervousness about the plan. His concern stemmed from the unknown, “What if a student has to go out of network and we don’t have the money?” Wise asked. School Committee member Chuck Robinson echoed some of the same concerns regarding the sustainability of the proposal. Wise also asked to be assured that the budget allowed for a path to universal full-day kindergarten. Bottan indicated that the proposed budget already reduces dependence on the tuition offset. She assured Wise, “We’ve been able to apply savings to reduce tuition, and we’re building a pathway to absorb the full offset over the next several years.”

Chair Shawn Brandt reminded the public that the committee and the staff can still take input about and address questions regarding the budget before it plans to vote on the budget on January 26.

The School Committee adjourned at 8:35 pm. 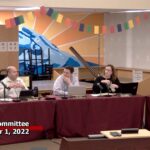