Reading, MA — Since 1992, the Common Lighting Fund has come under the care of the Reading/North Reading Chamber of Commerce. The Chamber publicizes and organizes the holiday event and solicits large and small donations from member businesses and the general public. At times the Chamber has requested and received funding support from the Reading 350th Celebration Trust Fund.

It was not always so. In the early days, funding came from the town budget. For many years, Reading contracted with a private firm to handle the dramatic display. That all changed at the May 1976 Town Meeting. We were in a belt-tightening era just three years after the energy crisis. After lengthy debate over the propriety of the government’s use of tax dollars to sponsor the celebration, by a vote of 86 to 85, the lighting’s appropriation was removed from the budget, and a new era began.

Following the vote, then Chronicle editor Bruce Morang reflected on the decision. He opined: “This vote was not done idly and not without serious debate, but the question remains unanswered whether or not this community and its people have a sense of community and a sense of what that festival of lights means to each heart that contemplates it.” His question was soon answered in the affirmative. Business owner, longtime Town Meeting member, and future Select Board member, Marvin Rosenthal, rallied both the business community and the general public. He declared, “We’re going to raise the entire amount by asking people for nickels, dimes, and dollars, and we’re going to have a lighting display that is part of all of us.” His efforts resulted in the establishment of a fund to purchase bulbs which he donated to the town. He also set up a maintenance program for years to come.

In 1982, a new fund was established in order to expand on Rosenthal’s efforts. A trio of local business executives: Bruce Morang (Reading Chronicle), Walter Arsenault (Harrow’s Pies), and Arnold Burger, opened a bank account and convinced townspeople to fill its coffers. Without missing a beat, this fund kept the holiday spirit alive in the center of town for ten years until the Chamber assumed leadership in 1992.

In 2006, the 30th year of the modern era of our common lighting, the vision displayed by Rosenthal and all who rallied to the cause encountered another challenge. Significant tree growth required more lighting than the power supply could safely accommodate. New technology provided an answer. At that time, Bob Keating, from the Town’s Forestry Department, explained the benefits of LED lighting as a solution. A successful test was run on the two pear trees on either side of the walkway to Town Hall. In subsequent years, the incandescent bulbs on the remaining trees were gradually replaced by LED bulbs, using the funds raised by and donated by the Chamber.

To this day, the Reading/North Reading Chamber continues to raise funds from both the general public and its local business members to cover replacement bulbs as well as the cost of the electricity that it takes to light the trees. In addition, the Chamber orchestrates the downtown lighting festival day of celebration every year on the Sunday after Thanksgiving. 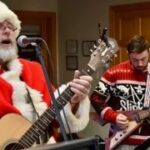 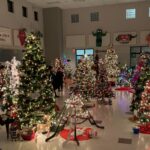