Reading, MA – Excerpts from the Reading Police and Fire Log: 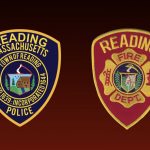