The Community Planning and Development Commission (CPDC) continued its public hearing on Monday on a proposed 40R development at 6-16 Chute Street. The current building on the 17,986 square foot site, built in 1974, is a one-story commercial building that houses several businesses, including the Last Corner Restaurant, The Green Tomato, and a laundromat.

Project architect Jeffrey Olinger shared changes that have been made as a result of previous meetings with the CPDC. The proposed building would create two commercial spaces on the first floor facing High Street with an enclosed parking garage on the first floor, to be used by residents of the upper floors. The garage would be accessed via a Chute Street entrance

Olinger reported that the amount of commercial space had been increased to 4,197 square feet, a 32% increase over the original proposal. The number of units has been reduced to 31, and the number of parking spaces in the garage has been reduced to 39. The second-floor terrace will now be accessible from the first-floor retail space. The setback from the property’s north boundary, where it abuts residential properties on Woburn Street, has been increased to 26 feet. The amenity space on the second floor has also been reconfigured.

“I think this building is growing on me,” CPDC chair Pamela Adrian commented.

CPDC member Heather Clish continued to express concerns over the “triangle” the public space proposed on the southern end of the property, stating that it should be more welcoming for public use, possibly to include a shade tree. Clish also shared concerns regarding building environmental issues and with the “green wall” live plant arrangements that would shield the garage on the Chute Street side of the building. The developer acknowledged that he had to do “more homework” on the green wall. CPDC member Anthony D’Arezzo continued to share concerns about unit density in the project.

Several residents expressed concerns over noise mitigation from all the mechanical equipment needed on the roof of the building. Resident Mary Ellen O’Neill shared her opinion that the design does not fit the “New England character” of the downtown. “It looks messy,” O’Neill stated. She suggested changes in the color palette to make the facade more appealing.

CPDC continued the public hearing on the project to December 13 at 9:30 pm.

CPDC also continued a planned public hearing on the proposed project at 18 Woburn Street and withdrew a hearing on proposed garages at Johnson Woods without prejudice. CPDC reviewed the presentation for a zoning amendment warrant article for November Town Meeting regarding the triggers for site plan and minor site plan review. The changes are suggested to ensure that CPDC has an appropriate review when properties have a change of use.

CPDC has included in the warrant report a written report on progress regarding updates to the 40R bylaw as requested by Town Meeting. Member John Weston lamented the inability of CPDC to give a verbal report with questions, especially as there is an article on the warrant seeking a moratorium on 40R development until changes to the bylaw can be made. “Town Meeting will not get full dialog on the issue,” Weston stated. A public hearing on changes to the 40R bylaw is scheduled for December 6. 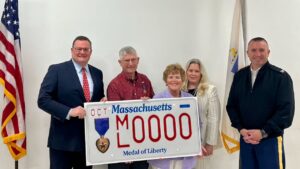