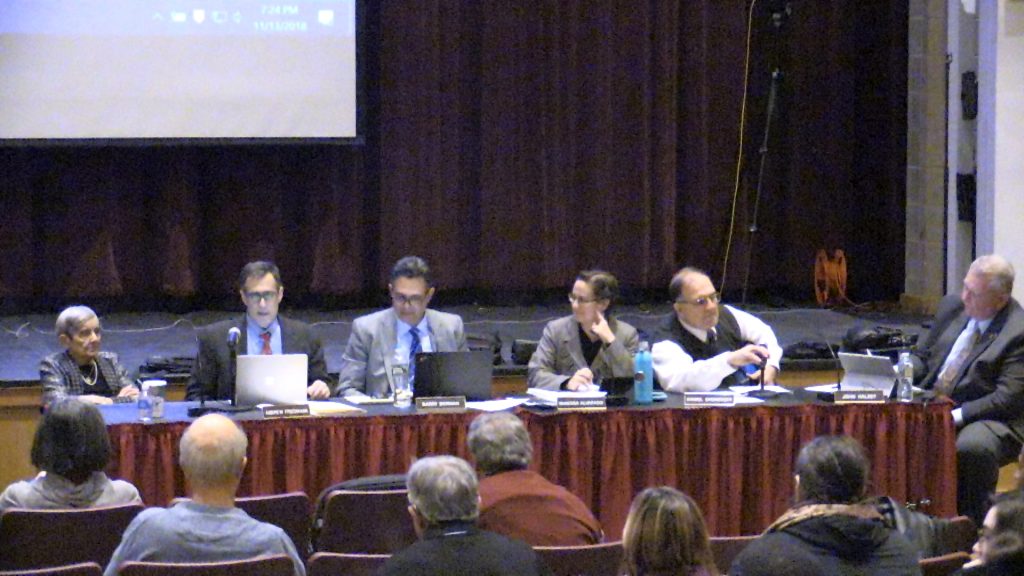 Select Board Chair Andrew Friedmann presented the board with four action items for consideration in response to the continuing issue of racially charged and anti-semitic graffiti in town at their meeting on Tuesday night. Friedmann suggested that a permanent Human Rights Board that is separate from oversight by the Select Board be established. The role of this board would be to “make addressing acts of hate and hate speech a community-wide priority and to create a purposeful, strong and permanent collaboration between the town side and school side on these issues.” The new board would replace the current Human Relations Advisory Committee (HRAC). He also recommended that a “point person” be appointed to coordinate town government response to hate issues. Friedmann would like to see required Anti-Defamation League training be taken by all community leaders and have the town adopt ethnic and religious observance accommodations similar to those of the Reading Public Schools. 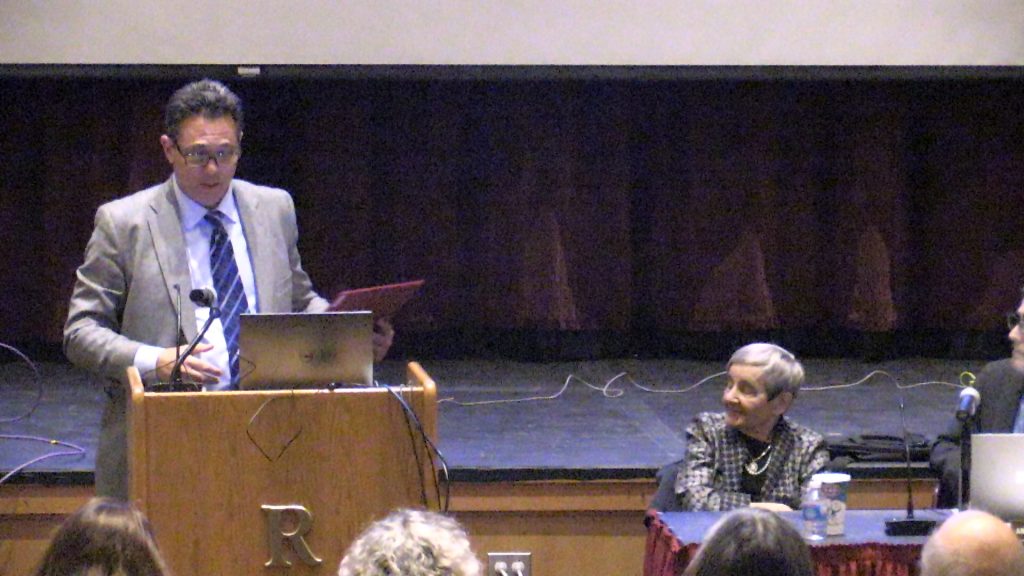 The establishment of a new board was the source of most of the discussion. Member Barry Berman questioned how this board would be different from the current HRAC and why the role of the current committee could not be tweaked. Board member Vanessa Alvarado responded that the new board’s independence would allow it greater freedom. Member Dan Ensminger suggested that the Select Board could propose an instructional motion at town meeting on Thursday that would create an ad-hoc committee of town meeting to determine what was needed and make a suggestion. Friedmann insisted that the Select Board could get the process started now, not needing Town Meeting to act unless a charter change was needed. Resident Bill Brown expressed concern over a government-sponsored group regulating and defining “hate speech”, fearing First Amendment issues. Board member John Halsey suggested that a group similar to the Reading Coalition Against Substance Abuse could be formed without the board having to make it a formal board. Several residents, including a METCO parent, spoke out with passion and frustration that the Select Board was getting stuck in minutia and details, insisting that they simply take some action. “This [the incidents] has gone on for too long,” one resident implored. “We need to figure out how to take steps to move forward,” resident Linda Snow Dockser urged.

Board member Barry Berman offered a motion that the Select Board create an ad-hoc committee made up of community leaders to discuss all four suggestions, including the creation of a new Human Rights Board and make recommendations to the Select Board about what action to take. The board voted 5-0 to approve the motion. By the same vote, Alvarado and Berman were then appointed to be the Select Board’s representatives to the ad-hoc committee. 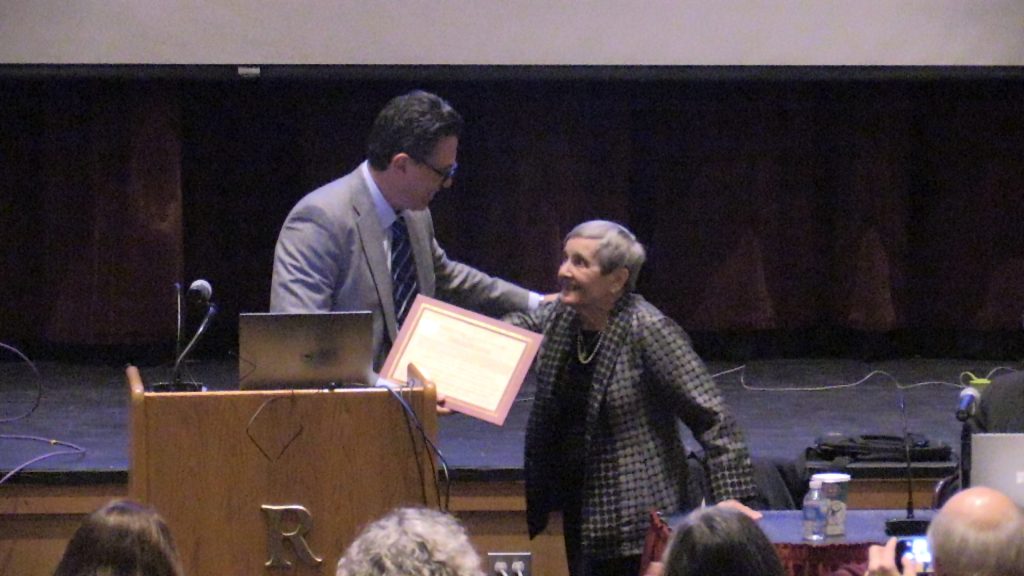 The meeting opened with a presentation of a Certificate of Gratitude to Dr. Anna Ornstein for her attention given to the town in aiding the community through these issues. Berman commended Ornstein, a Holocaust survivor, for challenging all Reading citizens. “Never again can we allow hate and fear to become the norm,” Berman stated. Ornstein graciously accepted the honor. “I feel your struggle,” she commented, “Most of the community are not a part of what you are now famous for.” Ornstein continued. She then challenged those assembled to taken action against these acts. Citing her experiences under the Nazi regime, she reminded that, “Keeping silent did not work.” She encouraged the community to get involved in a positive way, “As long as there are non-Jews who stand up for their Jewish neighbors, this will not happen in this country,” she concluded. Ornstein stayed and advised for the discussion about Friedmann’s proposals. 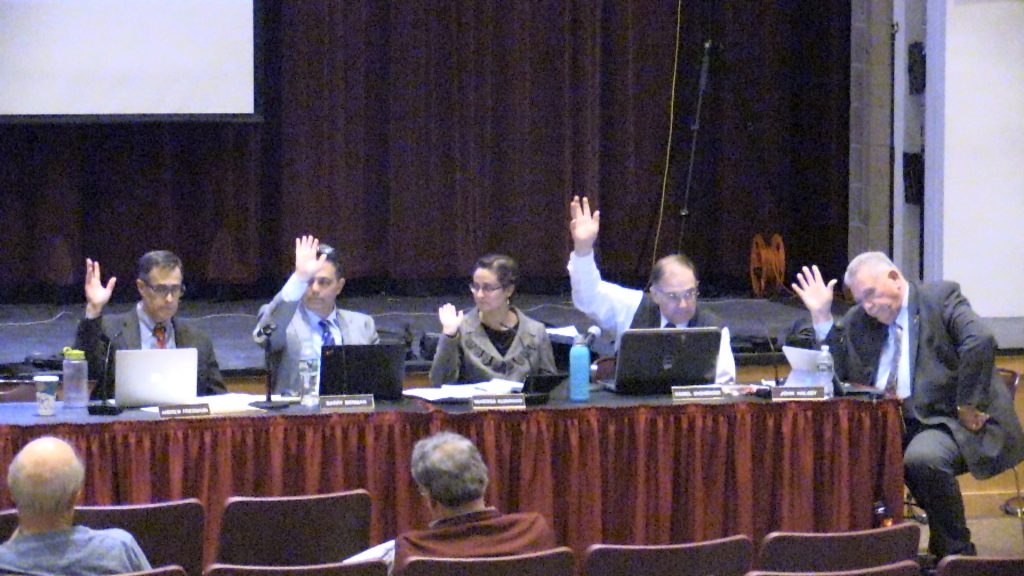 The Select Board also voted 5-0 to allow Ensminger to compose a letter to the Federal Communications Commission opposing possible new regulations that could affect cable corporation payments for community access television. Additionally, the board voted 5-0 to remove the time restriction on the acceptance of a gift from the Reading Softball Little League, that will allow work to begin on updating the field at Sturgis Park as early as Wednesday, November 14. The board voted 5-0 to fill vacancies on the Cemetery Board of Trustees and on the Board of Health. Twenty liquor licenses in various establishments around town were renewed by a vote of 4-0, with Friedmann recusing himself from the discussion.

The Select Board adjourned at 10:20 to executive session.