Readingites at the Boston Marathon

By ALAN FOULDS and ACE FOULDS

24 Readingites will Attempt to go the Distance this Marathon Monday

This Monday is the 122nd running of the famed and fabled Boston Marathon, and included on this year’s entrant list are 24 Reading residents. Two members of the local Mystic Runners club are among them.

Paul Whitelam is running the Hopkinton-to-Boston course for the fourth time and earned his qualifying time at last year’s race as well as in New York. In all, he’s run five marathons. Whitelam says he is looking forward to it and, maybe, enjoy cooler temperatures than the last two years. Rick Collette is running it for the 30th time. When asked why he runs every year he said, “It’s like having the Olympics in your backyard.”

Also running is Kate Mignosa. This is Kate’s second Boston Marathon. She jumped at the opportunity to run last year for a charity she was actually working for, Newton Wellesley Weston Committee for Community Living. She qualified at that race for this year. Mignosa comes from a running family which hosts the annual Take the Lake 5K. She really fell in love with the sport as an athlete on the Reading Cross Country team. She says running is her passion. She attends Boston College and finds the running community there to be exciting and fun. She’s done much of her long run training on the course.

Reading entrants into the 2018 Boston Marathon

Alvarado Officially Joins Board of Selectmen

Newly elected Selectmen Vanessa Alvarado was formally sworn in at the beginning of the board’s April 12 meeting. Alvarado thanked the voters and stated that she looked forward serving them in the position. Acting-chair Barry Berman welcomed Alvarado to the board declaring, “Now it is time to get to work.” Berman also thanked John Arena for his six years of service on the board and for his prior service on the Finance Committee. The board did a brief reorganization, with Berman becoming Acting-Chair and Dan Ensminger in the dual role as Acting-Vice Chair and as board Secretary. The board also reassigned a few of its liaison assignments. The Selectmen will do a full reorganization at its June 19 meeting.

Berman floated the idea of having a Board of Selectmen liaison to each of the major building projects that will be starting in town over the next couple of years. This liaison could serve as a point person for residents to contact if there are issues as the projects are built. Selectmen Andrew Friedmann will try to develop the idea into a workable policy.

While Berman had already conceived of the idea prior to the meeting, it came on the heels of a resident concern regarding the 40B development on Prescott Street. The resident concern was regarding hazardous substances on the site and who was “watching” the project for the town to make sure the developer complied with all their agreements. [More] 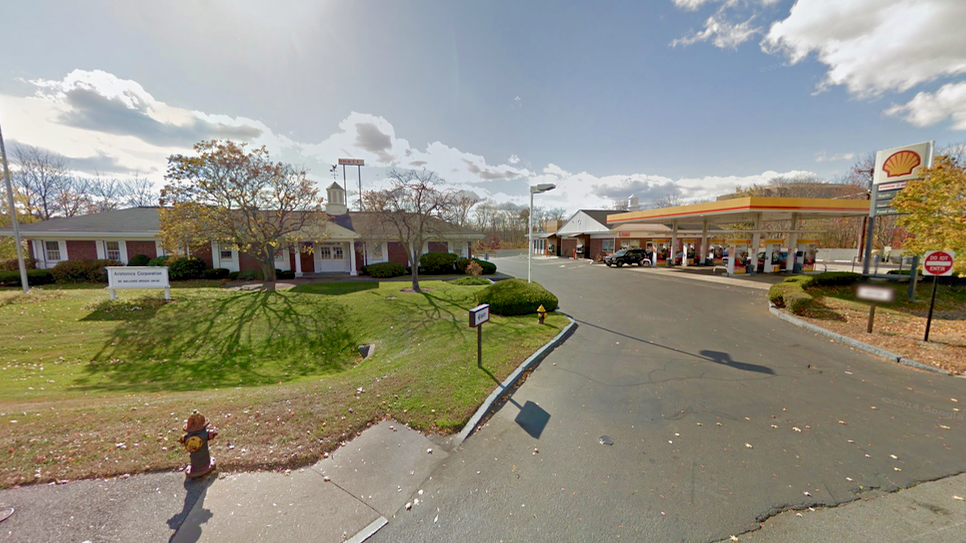 The Community Planning and Development Commission (CPDC), voting 5-0, approved a site plan review for 95 Walker’s Brook Drive, the office building next to the Shell Gas Station. The applicant and new owner, Perico Implants North, is a long-time dental surgery practice that is moving from Wakefield. Scott Cameron, speaking for the applicant, outlined plans which include remodeling the current building and restructuring the parking lot. The new parking area will be reduced by 8,700 square feet, reducing the number of parking spaces from 70 to 45. The dental business anticipates that its new space will only need 75 percent of the parking that the current office use generated. There will also be added islands and landscaping in the rearranged parking area. The changes will reduce the percentage of impervious coverage on the lot from 80 percent to 61 percent. The new lot will be entered via a current easement through the Shell parking lot and will exit onto Walker’s Brook Drive through a shared exit with Shell. Concern was expressed as to whether or not deliveries at the Dunkin’ Donuts in the gas station would create issues with the proposed entrance to the new site. CPDC member John Weston conceded that this was an issue to be resolved between neighbors and not in CPDC’s purview. The applicant will return for the required sign permits when needed. 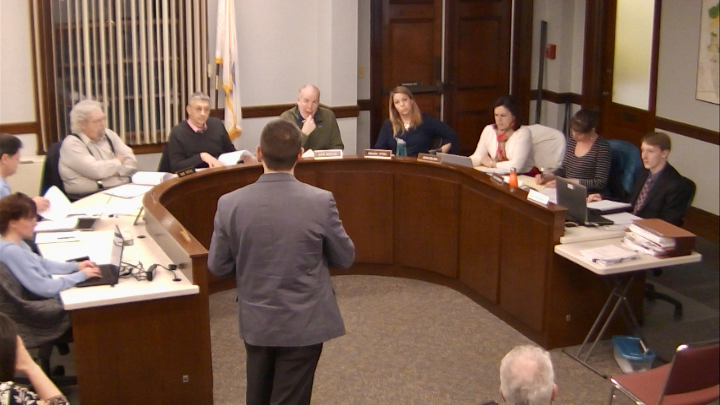 The CPDC also heard a concept plan review for a proposed two-lot development at 40 Grove Street. This was an informal inquiry seeking to determine if the board would be open to the applicant’s idea for the development before investing significant resources into formal plans. There is an historic structure on the site that would be retained and would share a driveway with a new house to be constructed on the rear of the property. [More] 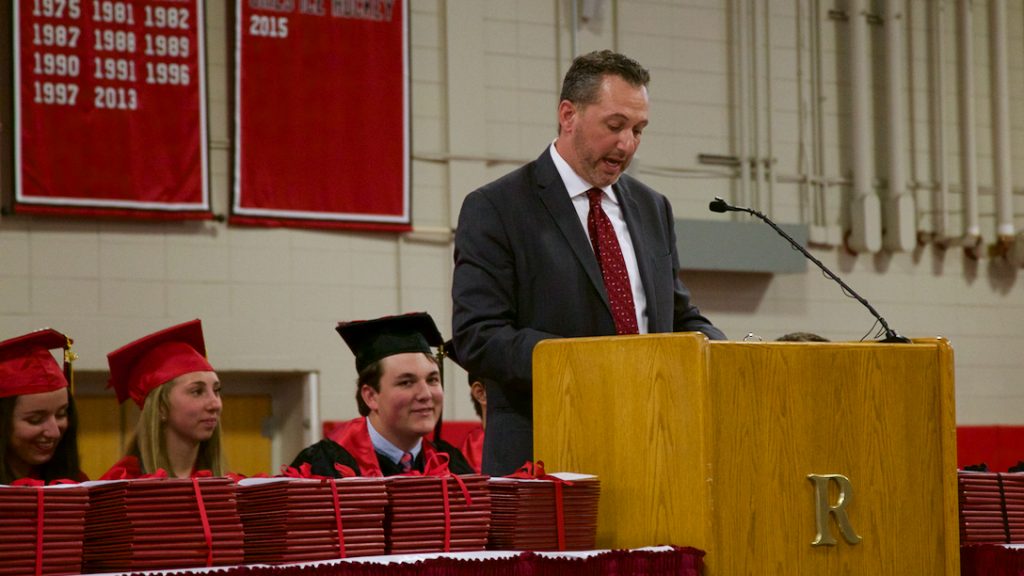 A group of students and parents gathered at the School Committee meeting on April 9 to attempt to persuade the committee to bring back Adam Bakr as the principal at Reading Memorial High School (RMHS) for the 2018-2019 school year. Bakr submitted his resignation in December, effective at the end of the school year. Superintendent of Schools John Doherty indicated at the March 19 School Committee meeting that there may be a need to appoint an interim principal due to the late timing of a new search process. The final candidate from the previous search declined the position. 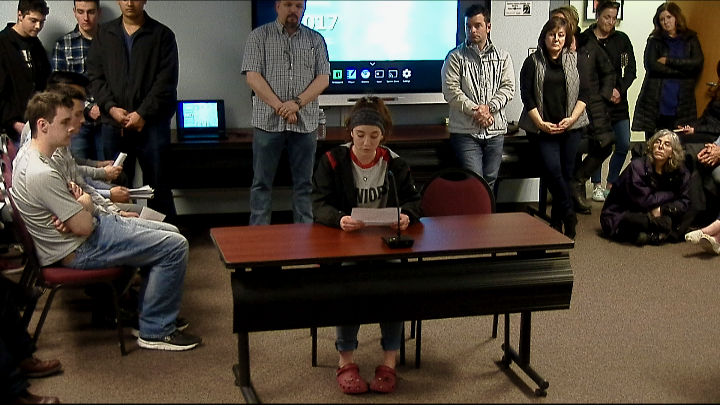 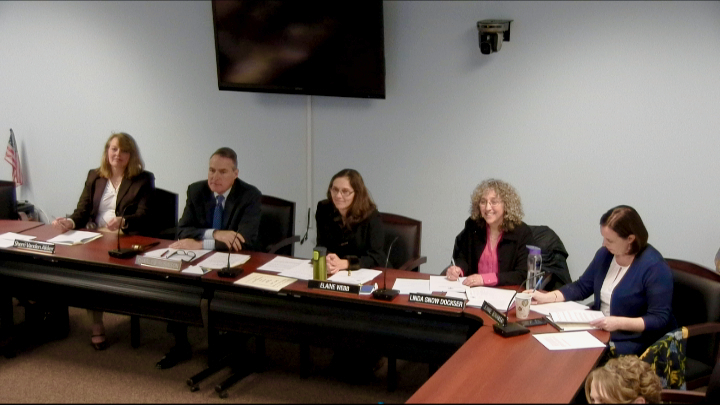 Prior to the public comment, School Committee chair Chuck Robinson, while impressed by the students who spoke, warned the group that there could be no discussion of the character of an employee, good or bad, in a public meeting. He did indicate that these items could be discussed with the committee in executive session. Robinson also reminded the group that the superintendent was responsible for personnel matters. Doherty did not respond during the public comment portion of the meeting but did indicate during his report that a new high school principal search was underway with 17 applications and that he expected the search to be finalized by early May. No further action was taken by the committee. [More] 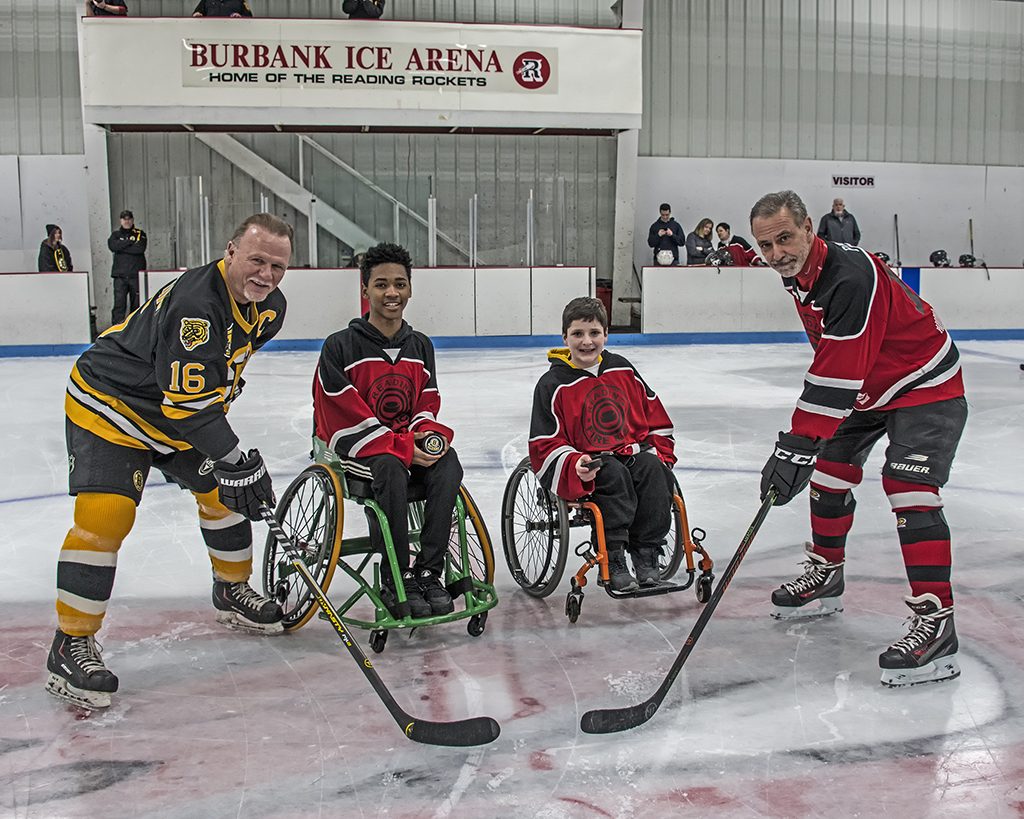 The Reading Cooperative Charitable Foundation is pleased to announce that the Reading Schoolhouse Condo Fire Fund officially raised and donated $9,350 to the Reading Schoolhouse Condo Fire Fund after organizing last month’s Bruins Alumni Benefit Hockey Game. The event took place on Saturday, Feb. 10 at the Burbank Arena in Reading, MA. Former Bruins stars in attendance included Bruins Alumni Co-Captains Rick Middleton and Terry O’Reilly. The Boston Bruins Alumni faced off against Reading Fire & Ice, which was made up of Reading Cooperative bank employees and their families, as well as members of the Reading Fire Department 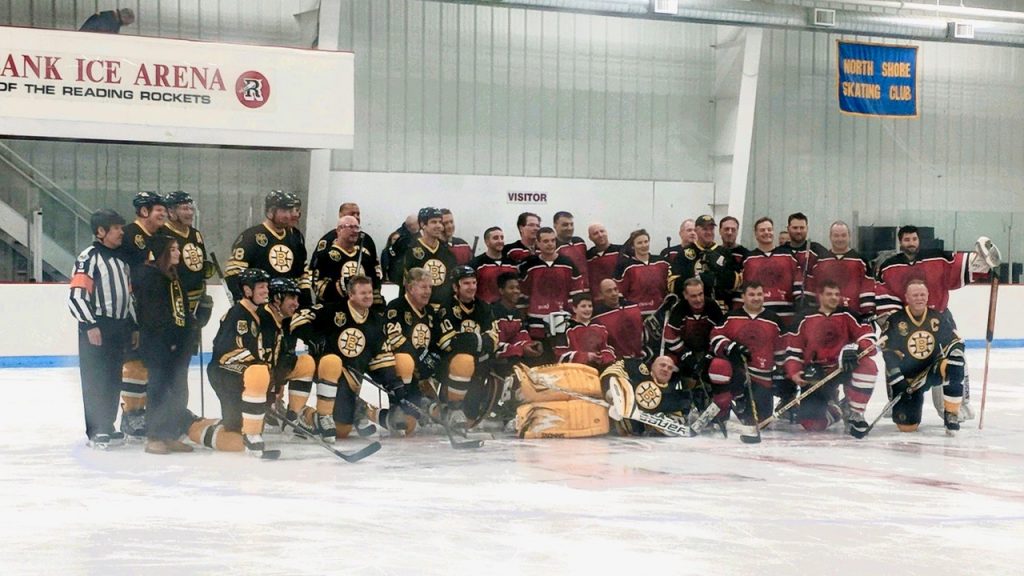 “We want to thank all of the sponsors, the crowd that turned out, and those at the bank who helped with outreach and logistics to make this event a success,” said Shanna Cahalane, Vice President and Director of Marketing at Reading Cooperative Bank. “Everything exceeded our expectations, and that couldn’t have happened without our team’s dedication; they pulled it all together in such a short period of time.” [More]

Reading Rotarian and Eagle Scout John Halsey presented certificates of congratulations to Troop 702’s new Eagle Scouts, Ben House, and Bryan Doucette at their Eagle Court of Honor. John has been working with District Governor David Gardner to strengthen the partnership between Rotary and Scouting. John is also on a Council Member for the Spirit of Adventure Council, which includes Reading. John has been busy attending Eagle Courts of Honor in Reading as Troop 702 (sponsored by Old South Church) and Troop 728 (sponsored by St. Agnes) have been producing a lot of Scouts reaching the Eagle rank. In his remarks during the Court of Honor, John said that Reading is known in the Spirit of Adventure Council as the Eagle’s Nest because the town has produced more Eagle Scouts over the past 12 years than any other municipality in the Council, including Boston and much larger cities and towns. [More]

Please join the Board of Reading Education Foundation for its Spring Gala event, the Imagination Celebration on Saturday, April 28th at 7:30pm. A fantastic cocktail party, this fundraiser offers an opportunity each year for the Reading community and school staff to join REF board members to celebrate what can be accomplished for our students when working together. This year, the gala will be held in the Lee Kimball showroom located in the newly-renovated, historical, M.F. Charles building in Reading. The event promises to be a relaxed evening of conversation, with an open wine and beer bar and delicious appetizers and desserts. All proceeds from this annual event go towards teacher grants in Reading schools.

In conjunction with the Gala, REF is holding an online auction hosted by Bidding For Good, which runs from April 23rd to May 7th. Bargain hunters and REF supporters can register for the online auction at biddingforgood.com/readingef to start bidding on April 23rd! [More]

Arts Reading welcomes Christopher J. Carino, Chairman of the Albion Cultural Exchange in Wakefield, MA. Mr. Carino will discuss how this newly created art and cultural district was developed and is a key driver of economic development that creates jobs and supports small businesses. Creating, transforming, redeveloping and marketing are all part of the vision and planning process.

Come be inspired about the potential for the arts and cultural impact we can make in Reading.