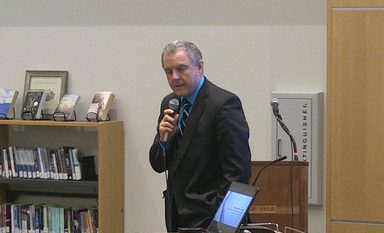 Reading, MA — Superintendent of Schools John Doherty presented what he referred to as his “restoration” budget to the School Committee at its January 11 meeting. The restoration budget provides the voters with the superintendent’s priorities if a Proposition 2 1/2 override were to pass in the April 3 election. According to Doherty, this budget reflects what it would take to restore many of the positions and services which have been cut from the district budget over the last five years. Doherty cited that over $4,000,000 in cuts have been made to the school district budget during that time period, most to the Regular Day cost center. “This budget would move us from a reactive mode to a pro-active mode,” Doherty suggested.

The $2,495,000 in budget additions are highlighted by the restoration of six high school teachers, seven middle school teachers, four elementary teachers, and one elementary tutor. It also includes salary adjustments to aid in the attraction of new teachers and retention of current teachers. It adds two districtwide curriculum coordinators for grades kindergarten through grade eight. It also restructures several administrative positions to help make the district more efficient in its work. The plan calls for an assistant principal for each elementary school, adding two positions and adapting the three-team chair roles that currently serve the five schools. Also included would be the final installment to implement the new science curriculum, an additional computer technician, and a payroll/human resources accountant. It would restore the current cleaning and maintenance schedule for the high school and return the two additional games for each high school athletics team that were eliminated from the year’s budget. Doherty stated that these budget additions would bring class sizes in grade three to five back to suggested levels, sustain the middle school model which has been effective for over thirty years and strengthen interventions with students who are struggling. 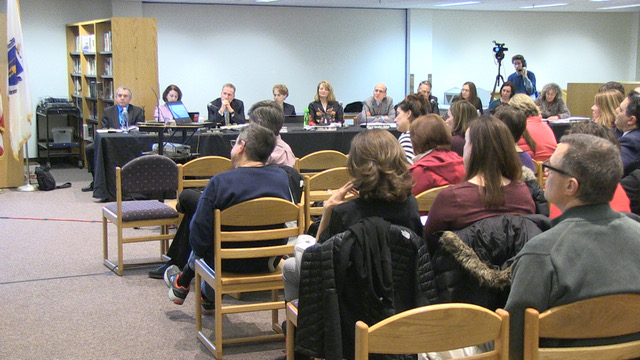 Doherty continued, mentioning that there were over ten positions that are not restored from what has been cut over the last five years. These include a middle school health teacher, one high school teacher, and the virtual high school. Doherty also mentioned that professional development funds are not been fully restored with this addition. The $2,495,000 increase would also add $434,250 in benefits costs to the municipal budget. 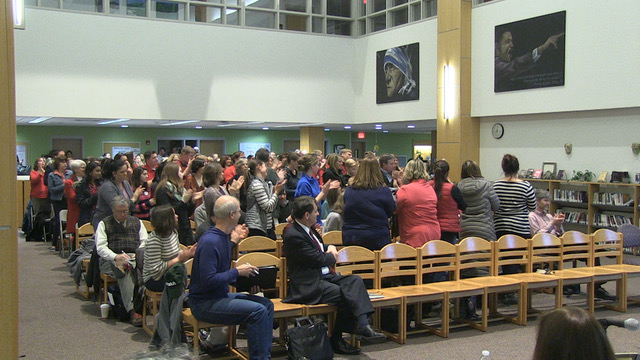 The meeting began with a raucous, rally-like public hearing where most speakers were given standing ovations after their comments. During the hearing, the committee listened to testimony about the balanced budget presented over the previous two meetings. Eric Goldstein, representing the Reading Teachers Association, derided the balanced budget stating that the cuts would continue to cause the Reading Public Schools to slide behind other communities. “We ask this community to stand with us and pass an override,” Goldstein concluded. Julie Merrill, a seventh-grade teacher at Parker Middle School commented that the balanced budget would, “make it unlikely that we will close the achievement gap.” Casey Vierra, an eighth-grade student at Parker asked the crowd to think of the students whose opportunities will be lost with the budget cuts. Speaking about those who make the choices regarding budgets “It is not their education, it is OUR education.” Vierra declared.

The committee was reminded of the eight teaching positions lost at Reading Memorial High School over the last five years, and the effects that these losses have had on the high school. Students seeking second science courses are turned down due to lack of teachers. Many physical education classes have over more than students in them, and several math and science sections have well over 30 students enrolled. Dr. Jeffrey Ryan, adorned in a replica of the cape worn by President Roosevelt at the Yalta conference, reminded the board of all the additional tasks performed by high school teachers that fall outside their prescribed duties, including college recommendation letters. Due to the lack of time “There will be highly qualified kids who cannot get college recommendations.” Ryan suggested. Leah Christie, a middle school spanish teacher, extolled the virtues of a foreign language to the board. “If Reading is committed to offering a rigorous curriculum, then this (balanced budget) cannot hold. This budget is unacceptable and our talented students deserve better.” Christie concluded.