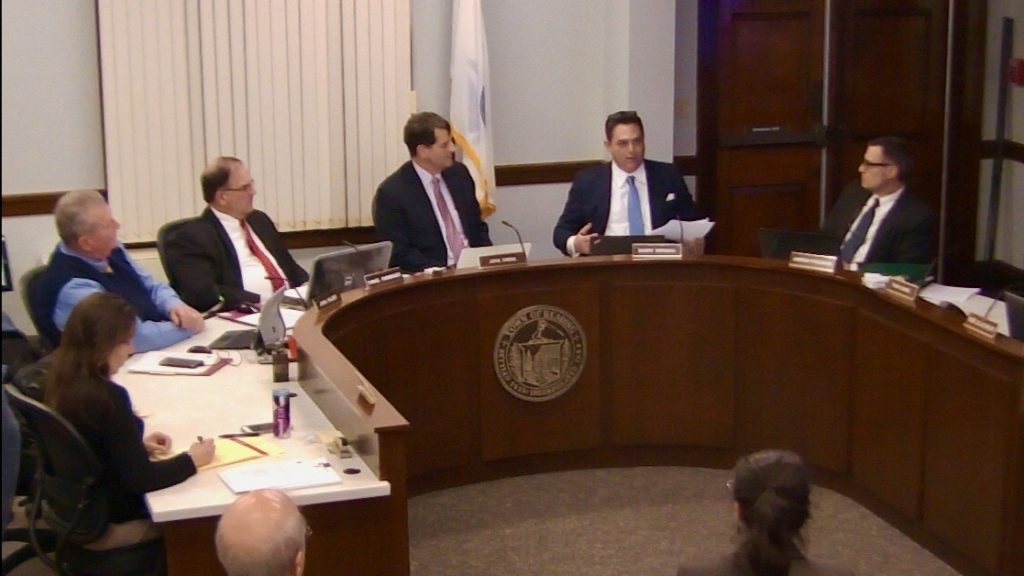 Reading, MA — Town Manager Robert LeLacheur presented his balanced Fiscal Year 2019 municipal budget to the Board of Selectmen at the meeting on January 9. The 76-page document suggested a budget of $26,568,710 which is a 2.5% increase over the FY18 budget and includes $1.5 million in cuts from the budget requests made by the department heads at the selectmen’s budget hearings in December. One shared clerk was added to the public safety budget which will allow the officers and firefighters who have been covering the work to spend more time on more pressing duties. It was noted by LeLacheur that none of the nine requested new public safety officers were added into the budget. Most of the budget increase can be attributed to two factors: health insurance and software and other licenses. Technology costs rise annually at a greater rate than is allowed for through tax growth under Proposition 2 ½. Board discussion focused on the lack of the new public safety officers and the lack of a new assistant town accountant in the budget. LeLacheur did note that some of the town accountant’s overwork would be eased if the School Committee adopts Superintendent John Doherty’s suggestion of adding an assistant school accountant in the school department.

LeLacheur also presented a list to the board of priorities for additions to the budget if a Proposition 2 ½ override were to pass in the April town election, and how much each will cost the average Reading taxpayer. Five of the top positions listed were in public safety. Chair John Arena praised the list stating that it “gave folks a prioritized list of exactly where money would be spent.” A discussion then ensued about how specific to get on an override question and how much additional funding should be asked for if it were placed on the ballot in April. LeLacheur pointed out that funding for the Reading Coalition Against Substance Abuse was not on the list because it is funded with a grant through FY 2019, but it would need to be funded in the FY 2020 budget.

During the public comment portion of the meeting resident Demetra Tseckares expressed concern about the board separating governing from politics. Tseckares specifically cited the board’s failure to follow its own policy regarding having a chair who is running for re-election, and the fact that the chair used meeting time to announce that he was running for re-election. She also mentioned the chair’s use of social media to publicize that he was holding office hours before the meeting, something every member does in a rotation. Arena responded with a chart that showed that for most of the past seventeen years the chair of the board has been in his or her final year of service, possibly seeking re-election. It remains unclear as to why the change was made, though it was suggested by Selectman Barry Berman that it takes two years of service to really understand the workings of the board and of the town government. The board already had plans to review and update its own policies, and Tseckares was assured that the issue would be addressed. Berman proposed that the board have co-chairs each year, to prevent the appearance of impropriety. Berman and Selectman John Halsey will be getting together as a working group to offer updates to the entire first section of the Selectmen’s Policies, much of which has not been changed for over 20 years.

As part of the review of their policies, the selectmen voted 5-0 to accept minor edits and changes to section three of the Selectmen’s Policies that cleaned up language related to the granting of the various types of licenses in town. The board also promised to revisit its policy on liquor licenses at some date after budget season.