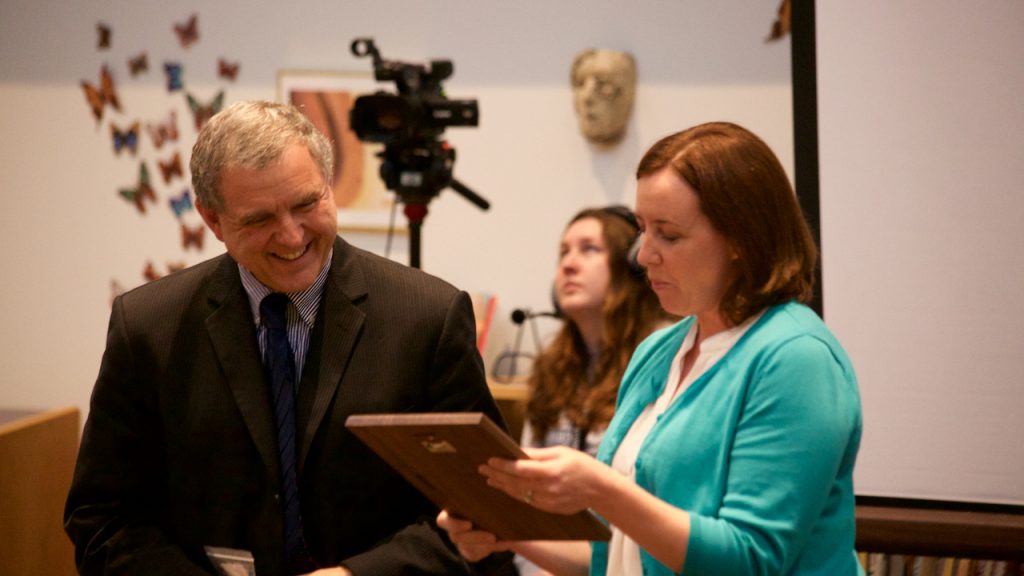 Dr. John Doherty received his final and summative evaluation for the 2016-2017 school year from the School Committee at its meeting on Monday, June 19. The evaluation of the superintendent is based on three general steps which are each broken down into smaller units of evaluation. The three steps are progress toward goals, performance on standards, and overall performance. The form used to collect the data are provided by the Department of Elementary and Secondary Education. Each member of the committee fills out the multi-page form, adding comments and evidence to support his or her ratings. Each committee member then has a private session with the superintendent to go over the form before it is finalized. The finalized forms are then compiled by a member of the committee; the ratings are averaged, and a final summative report is given. This report is then presented in public meeting by the compiler, School Committee member Jeanne Borawski. The summative report, including the individual evaluations, are available as part of the School Committee packet for the June 19 meeting and can be found on the Reading Public School website.

Dr. Doherty was rated as “proficient” in all three steps of the summative evaluation by the School Committee. Summative comments described him as “A strong leader”, “visionary”, “persistent”, and “dedicated to and passionate about the well-being of all our students.” Also cited as positive are Doherty’s “responsiveness to community requests for information, his leadership in social and emotional learning,” and the recognition he has outside of Reading as a leader in the field of public education. Several members of the committee in their individual comments complimented Doherty’s handling of unforeseen events in the the schools this past year, specifically citing the lead levels in the water, and the recent graffiti at the high school. Reading Memorial High School’s recent upgrade from a level two to a level one school was also noted several times.

The summative evaluation listed four areas that the School Committee would like the superintendent to focus on in the coming year. The first was to “develop a way to gather and respond to meaningful data on staff and teacher morale, work environment and culture.” Next was “Improving standardized test scores, especially at the Eaton School specifically, and the elementary level and high-needs subgroup of students generally.” The School Committee also asked Doherty to “realign goals and timeframes to focus our available resources on addressing student needs in a focused, prioritized manner.” Finally the School Committee pointed out that the superintendent needs to work on “improving his response to criticism and conflict.” This final concern is a result of notes by several committee members that Doherty often gets defensive or shows negative body language when challenged, or when a view opposing his own is expressed. In response to the summative evaluation, Doherty thanked the committee for its efforts on the evaluation, stating he thought the result was fair. “I heard the strengths and the areas I need to focus on.” Doherty responded. Borawski concluded the presentation with, “We are very grateful to have you leading our district.”

The School Committee was presented with the calendar for working on the Fiscal Year 2019 budget. This calendar is the same as was presented to the Selectmen on Tuesday, June 13. This generated a longer than anticipated discussion about how to determine what amount of funding to ask the Selectmen to consider for a potential Proposition 2 1/2 override vote in April. The School Committee also looked at year-end numbers for the Fiscal Year 2017 budget. It is estimated that between $25,000 and $50,000 will be returned to free cash this year by the school department, after funds are spent to purchase a few materials and items of technology to offset needs in the the Fiscal Year 2018 budget. The Committee also voted to accept the Fiscal Year 2018 budget number of $41,401,661 as voted on by Town Meeting in April. The meeting adjourned to Executive Session at 9:20 p.m.