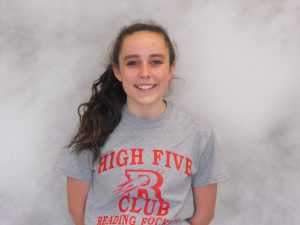 Julia is being recognized for her outstanding achievement in academics, athletics, and service. Academically, Julia is in the top 10% of the Class of 2017 and is a member of the National Honor Society and Spanish National Honor Society. She is a dedicated student who exemplifies scholarship, taking three Advanced Placement courses this year and earning the Hamilton Book award and a Bronze Medal on the National Spanish Exam last year as a junior. Julia has particularly enjoyed her studies in Calculus and Missing Voices. Athletically, Julia is a three member of the Girls Varsity Soccer Team, serving this year as one of the team’s captains. Playing sweeper, Julia helped lead the Lady Rockets to their first appearance in the State Tournament in 8 years. Julia also helped the team to a big win against undefeated Winchester during the regular season. In basketball, Julia has been a 4 year member of the Girls Varsity Team and served as co-captain this season. She helped lead the Lady Rocket hoop team to a berth in the State Tourney for the first time in a few years and also to a big victory against an outstanding Woburn team on Senior Night. Julia is also a 4 year member of the Varsity Softball Team and is a co-captain this year. Her favorite memory as a member of the softball team was reaching the State Championship in her sophomore year. In terms of service, Julia finds time to coach youth basketball clinics for elementary age children in Reading. She also volunteered with her fellow NHS peers at the annual Fall Reading Town Faire, as well as at the Reading Tree Lighting event this past December. Next year, Julia will be attending college and will be pursuing a major in the sciences. 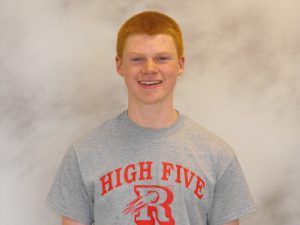 Patrick is being recognized for his excellence in academics, activities, and service. Academically, Patrick is a member of the National Honor Society and the Spanish National Honor Society. He consistently strives to challenge himself; this year he is taking a rigorous course load consisting of four Advanced Placement classes. Patrick has particularly enjoyed his studies in Spanish and in Physics during his four years at RMHS. Athletically, Patrick has been a 4 year member of the Baseball Program and will be playing catcher this season for the Rockets who open this Monday against Burlington. Patrick was also a member of the Summer League Rocket Baseball Team, who went on to win the Senior Babe Ruth Middlesex League Title and is hopeful that this spring season will bring similar results for the Rockets. In terms of activities, Patrick has been a 4 year member of the competitive RMHS Mock Trial Team, serving as President of the club this year and as the Head Lawyer over the past two years. He has also been a member of Model United Nations for the past three years, the Robotics team for one year, and a Social Chair for the Class of 2017 since his sophomore year. Patrick has also distinguished himself in his commitment to service, umpiring for Reading Little League and Babe Ruth baseball, as well as teaching CCD classes to elementary age children at St. Agnes Church. He also finds time to volunteer at the Mission of Deeds, assisting families in need by furnishing their homes. Patrick has also joined his NHS peers in other service initiatives including the Halloween Can Drive this past fall. Next year, Patrick will be attending college and will be pursuing a major in mechanical engineering. Congratulations, Patrick!