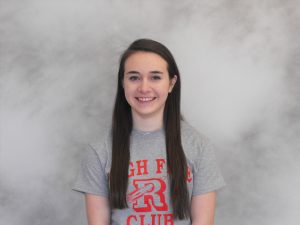 Brooke is being recognized for her outstanding achievement in academics, athletics, leadership, and service.Academically, Brooke ranks in the top 3% and is a member of both the National Honor Society and the Spanish National Honor Society. Last year, she earned a silver medal on the National Spanish Exam and was a member of the Century Club in both her freshman and sophomore years. Taking a rigorous course load of Honors and AP classes, Brooke’s favorite class is AP Computer Science. Athletically, Brooke has been a 4 year member of the Varsity Gymnastics team, and a co-captain this season. She has competed in both balance beam and floor exercise, earning her the Most Improved Award in her freshman and senior years. She helped the Rockets qualify for sectionals the past two years and a Middlesex League Title this year for the first time since 2007.Brooke also helped lead the Rockets to a first place finish at the Middlesex League Championship, as well as a #2 ranking in the North and a #6 ranking in the State. In terms of service, Brooke teaches gymnastics to children ages 3-9 at Winchester Gymnastics Academy and is an assistant coach for the 7 & 8 year old Xcel Bronze gymnastics team. Next year, Brooke will be attending college and majoring in either Computer Science or Computer Engineering. 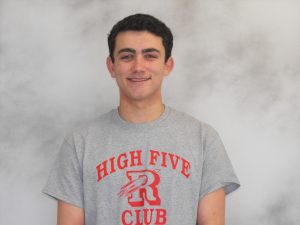 Erik is being recognized for excellence in academics, athletics, leadership, and service. Academically, Erik is in the top 30% of the Class of 2017 and challenges himself by taking a rigorous course load of Honors and AP classes including his favorite course: AP Statistics. He has consistently demonstrated scholarship in his time here at RMHS, earning Honor Roll status throughout all four years. Athletically, Erik is a two sport athlete, swimming for three years and running outdoor track for two. This year, he was selected by his swim peers and coaches to serve as one of the team’s captains and earned Middlesex League All-Star recognition for his outstanding accomplishments in the pool. In outdoor track, Erik helped the Rockets to win States in the relays last year and is very much looking forward to another great season this spring. In terms of service, Erik has selflessly dedicated over 150 hours to the Sunday Swim program at the YMCA, helping children with disabilities to learn how to swim and to build confidence in themselves in and out of the pool. Next year, Erik will be attending the University of Connecticut and will be majoring in Statistics. Congratulations, Erik!